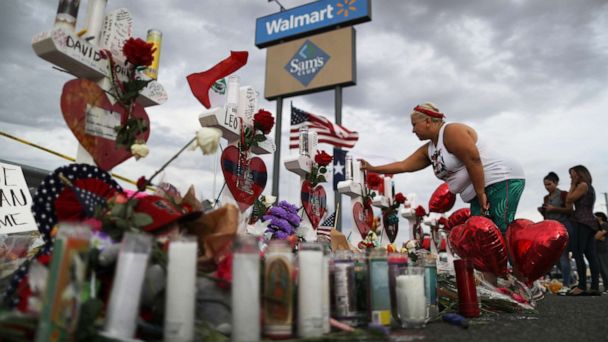 ABCNews
By JULIA JACOBO
Texas Gov. Greg Abbott is taking action to prevent domestic terrorism in the state following a shooting at an El Paso Walmart where the attacker said he targeted Mexicans.

Abbott, a Republican, has directed the Texas Department of Public Safety (DPS) to "take immediate action against extremism" by forming a domestic terrorism task force to "combat these hateful acts," according to a press release from his office.

Twenty-two people were killed and dozens more were injured in the Aug. 3 shooting, which occurred at a shopping center near the Mexican border. The gunman allegedly cased the store to look for Mexicans to kill before he carried out the attack, according to law enforcement officials.

Federal prosecutors have said they're weighing hate-crime charges and considering it a domestic terrorism case.

In response, Abbott has ordered the Texas DPS to conduct an intelligence assessment on the domestic terrorism threat in the state and "proactively seek, assess and monitor" both domestic terrorism and other mass casualty threats.

The state will also increase the number of DPS special agents and analysts in the department's Anti-Gang Centers to conduct investigations on "criminal gangs affiliated with Neo Nazi and White Nationalist groups," according to the release.

"Our top priority is to keep Texans safe in their communities," Abbott said in a statement. "Part of that mission is to combat domestic terrorism and root out the extremist ideologies that fuel hatred and violence in our state."

Abbott added, "Texas is stronger when we come together in pursuit of a shared goal, and today's actions are vital steps in our ongoing fight against extremism and violence."
Report a correction or typo
Related topics:
abc newsnational
Copyright © 2020 ABC News Internet Ventures.
More Videos
From CNN Newsource affiliates
TOP STORIES