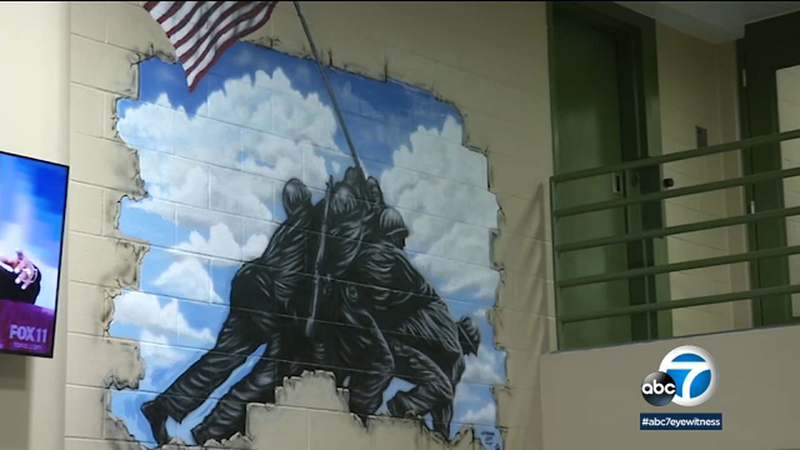 ORANGE, Calif. (KABC) -- An Orange County jail is being changed with the hope of helping veterans.

The new Housing Unit for Military Veterans (HUMV) is what the Orange County Sheriff's Department hopes will prevent veterans from going back to jail. To start, there is a patriotic theme.

"It was very important for us to make this look as much not like a jail as we could. Obviously, it still is. It still has cell doors and other things," said Sheriff Don Barnes.

He believes the murals, flags, even military-themed scrubs at the Theo Lacy Facility will help create the proper environment.

Barnes said he wants them to "start believing they're a veteran, entitled to services and opportunities to be successful."

Programming will also be tailored to veterans, including employment resources and substance abuse services. There will also be at least one veteran deputy in the unit at all times.

"The struggles that I know I've dealt with myself, to be able to give back to someone who's struggling with that now is just - kind of the thing that you should keep on giving after being in that same position," said Deputy Matthew Gibbs, who served in the Army from 2006 to 2014.

One of the first inmates that will benefit from the unit is an Army vet serving time for drug possession.

"I just was lost and I needed something to fill that void, that adrenaline rush and I found it through drugs, unfortunately, and it made me make some really awful decisions that I'm not proud of," said 39-year-old Garrett, who served in Afghanistan and Iraq for five years.

He believes this is nothing but a good thing for veterans struggling to get out of the vicious cycle.

"God knows what they see out there in the battlegrounds, and yet, when they come back to society, we expect them to turn all of that off and be good model citizens. We forget to ask, what are those invisible scars that you continue to carry in your soul and in your heart?" said Congressman Lou Correa, the representative for District 46.