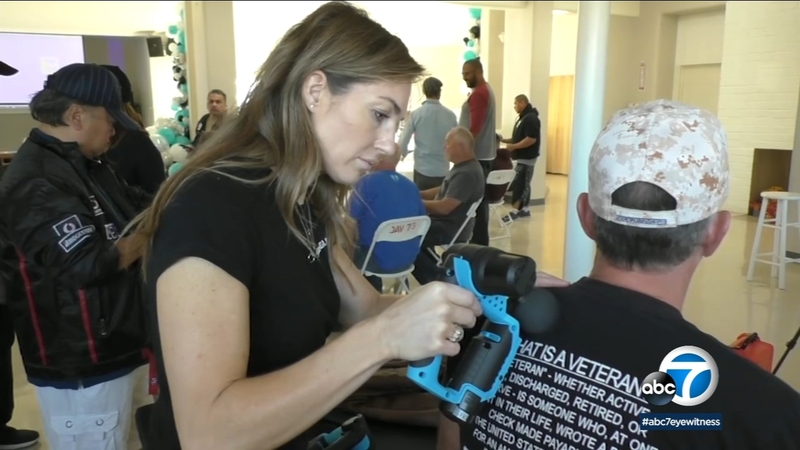 Local chiropractor wants to help veterans get some pain relief

A local chiropractor has figured out a way to offer some pain relief to veterans returning home from the battlefield.

Robert Graves was in the Marine Corps for 10 years.

Fellow veteran Jeff Bosley was in the Army Special Forces. He's suffered his share of pain as well.

"I actually have extensive arthritis in all my joints. I had both my knees done," Bosley said.

Bosley and Graves are not alone. So many veterans have pain due to their service, which is why a very appreciative American -- and chiropractor -- wanted to help.

Dr. Jason Wersland is the founder of Theragun.

"What I was trying to do is put something in someone's hands so they could treat themselves," he explained.

The Theragun is a hand-held machine that facilitates movement. It's not a massage device, but rather it stimulates circulation in painful areas for about 30 seconds, then you move it on to a different body part.

Graves said it made a huge difference for him.

"It felt like getting beat up by pillows. Instantly, I could move my shoulder a lot smoother," Graves said.

Daniel Contreras is with an organization called Disabled American Veterans. He likes the idea that using the Theragun gives vets a non-drug option to pain relief.

"It can give veterans, essentially, an alternative to a pharmacological approach in trying to get some therapy," he said.

Contreras shared that Wersland contacted them and is providing the equipment free of charge.

When Theragun released a new model, Wersland pulled all the older models and reconfigured them to donate to retired veterans in Los Angeles.

Wersland has already given out an additional 100 refurbished Theraguns. Now, they're looking to give out 300, so they're hoping other vets reach out to the DAV.

Former Dancing with the Stars' Maxim Chmerkovsky recently visited the DAV's Woodland Hills chapter to encourage veterans to give it a try.

"It really helped me at a time I had an injury, which could've taken me out of dance completely," Chmerkovsky said.