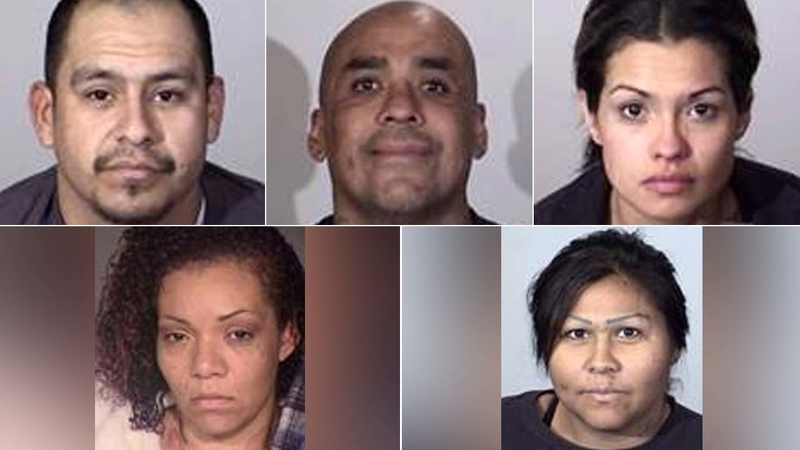 OXNARD, Calif. (KABC) -- Five people were arrested in connection with the theft of property from two cars belonging to Ventura County evacuees fleeing from the Thomas Fire.

On Dec. 5, the victims quickly packed up their cars with personal belongings and evacuated from their home, which was threatened by the raging Thomas Fire, Oxnard police said.

The residents drove their two vehicles, both black Suburbans, to their friend's home in the 3700 block of Dunkirk Drive in Oxnard to spend the night. That's when their cars were broken into, and various items were taken.

More than two weeks after the Thomas Fire first erupted in Ventura County, the 272,000-acre blaze appeared unwilling to be extinguished without a fight.

The Oxnard Police Department was notified, and an investigation was launched.

Investigators discovered that $10,000 in charges were made to a credit card belonging to the victims. Based on this information, detectives were able to identify the suspects involved.

"These people getting evacuated and in their haste are fleeing the city of Ventura. Then they come here and then this on top of that. It's disturbing," Detective Chip Buttell said.

Also during the investigation, Oxnard police responded to a disturbance call on Dec. 10 at the Channel Islands Inn. Detectives learned that this call was related to a suspect they believed was involved in the burglary.

Investigators served a search warrant on a room at the Channel Islands Inn and found property belonging to the burglary victims. Authorities also contacted three of the five suspects -- Jasmine Zavala, Maryann Zuniga and Juan Carillo -- at the inn.


A fourth suspect, identified as David Rosales, was arrested on Dec. 18 on unrelated charges. During his arrest, he was found to be in possession of property belonging to the burglary victims.

Detectives connected Rosales to a residence in Camarillo, where a search warrant was served and additional property belonging to the burglary victims was recovered, police said.

Since these arrests were announced, Oxnard police said they've received calls from other Ventura residents who said their property went missing during the blaze. Authorities are investigating whether these suspects stole items from anyone else.