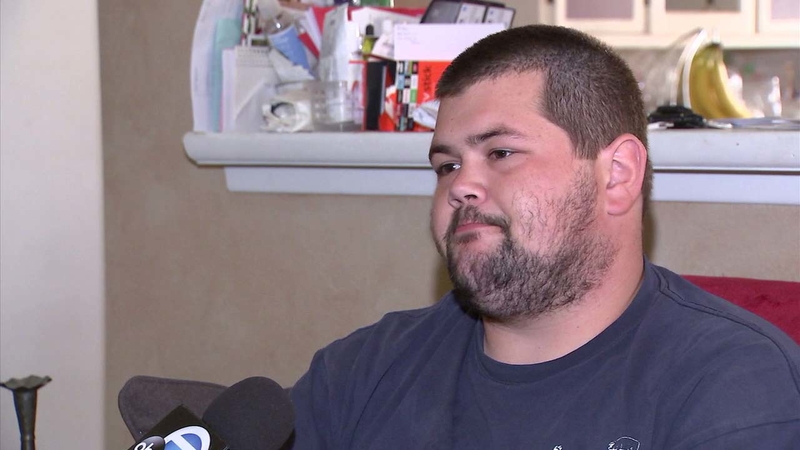 SIMI VALLEY, Calif. (KABC) -- A man who survived the Thousand Oaks massacre recalled the chilling moment when the gunman fired into the crowd and when someone yelled, "He's reloading!"

Dylan Short of Simi Valley said he was sitting about 45 feet from the entrance of Borderline Bar & Grill, facing the door, talking to a friend of his on Wednesday night. Around 11:30 p.m., he noticed a silhouette at the door.

Though he was in shock, Short said he recognized the sound of gunfire right away.

"Me being a responsible gun owner, I fired plenty of guns in my time," he said.

MORE: How to help victims of Thousand Oaks massacre

The friend Short was speaking with, who he said used to be in the U.S. Marine Corps, pushed Short, hard.

"That little extra shove is probably what kept me from getting hit by the shrapnel completely. Just made it so I was grazed, so I was very lucky," Short said, explaining that he was grazed by a bullet shrapnel.

Short then dropped to the ground, saying "I had many people laying on me." He said one of his friends, who used to be a bouncer at Borderline, busted a window. Then, others busted two other windows.

A man who survived the deadly mass shooting last year in Las Vegas also miraculously came out of a mass shooting at a bar in Thousand Oaks alive Wednesday.

"I saw a couple more flashes and then at that point, he had pretty much reloaded, and I heard somebody yell, 'He's reloading!' and that was when a good chunk of us had jumped up and went and followed the rest of the people out the window," Short said.

"I lost both my shoes, and it was my life or my shoes. I kept asking the person behind me, 'Am I bleeding?' because I felt me get hit, and he said, 'You're walking aren't you? Jump!' And I jumped. My leg caught the window and flung me," Short described.

He said upon jumping through the window, he rolled down a hillside for about 18 to 20 feet over broken glass, then slammed into a fence bordering the freeway. In addition to the graze wound, Short injured his right leg from jumping out of the window.

"I got up and started running in my socks...At that point, I realized he had reloaded, and he had started firing on the crowd again," Short said.

Short described the shooter as lanky and wearing a beanie low to his eyes.

"What really, really got me was the fact that when he pointed the gun at the girl behind the desk, she's a very sweet girl...When I saw him take somebody so innocent, their life like that, like it was nothing, at that point, I knew we had something more sick on our hands than somebody who was just angry," Short said.

Short said four of his friends died in the massacre. The gunman killed 12 people before apparently fatally shooting himself.

Jason Coffman, whose 22-year-old Cody was killed in the shooting at Borderline Bar & Grill, remembers his son.