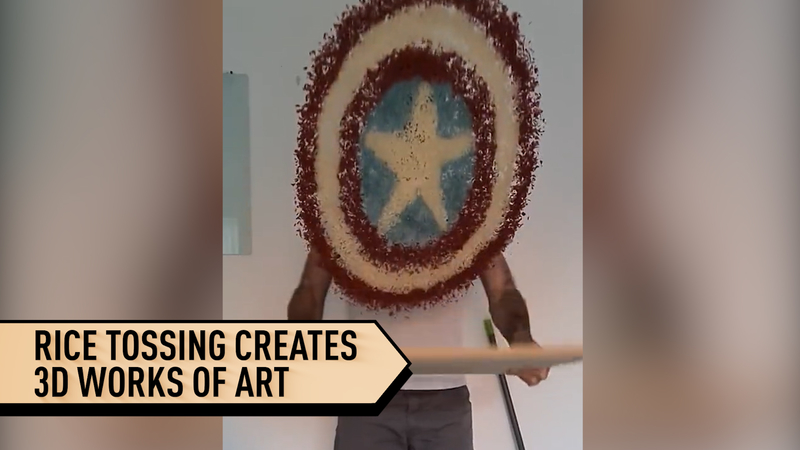 It's one of the latest viral social media trends: tossing rice to create 3D works of art. Lawrence Ferguson, known on TikTok as The Rice Artist, has had millions of views on his videos.

"It all started from lockdown really. I did 'I am bored' written because it was the start of lockdown and I was very bored," Ferguson said.

Ferguson credits his artistic background for his detailed character sketches.

"It was just trial and error. I used to do a lot of drawing and things like that in the past so maybe that influenced a little bit," he said.

The items needed to create this artwork are simple - rice, food coloring and a board.

"It's just normal rice which has been colored with food coloring and vinegar. I don't go through that much rice. And I do recolor it, so all the color gets made into dark colors like purple or black. And then I draw it out on one of the boards and I use a credit card to get into the detail," Ferguson explained.

The Rice Artist has created everything from Mickey Mouse to Johnny Cash to lyric videos.

His lyric video even caught the attention of rapper Busta Rhymes!

"Busta Rhymes was obviously the biggest by far and obviously for him to repost it on his Instagram as well was just crazy," said Ferguson.

"I need to think about that one properly because it's a lot of work," he said.

What started as a hobby during lockdown has earned Lawrence millions of views and millions of followers all over the world.

"It's very surreal to be honest," he said. "I don't think I'll stop in the near future. We'll have to see because I do enjoy it still, so I'll definitely be keeping it up."