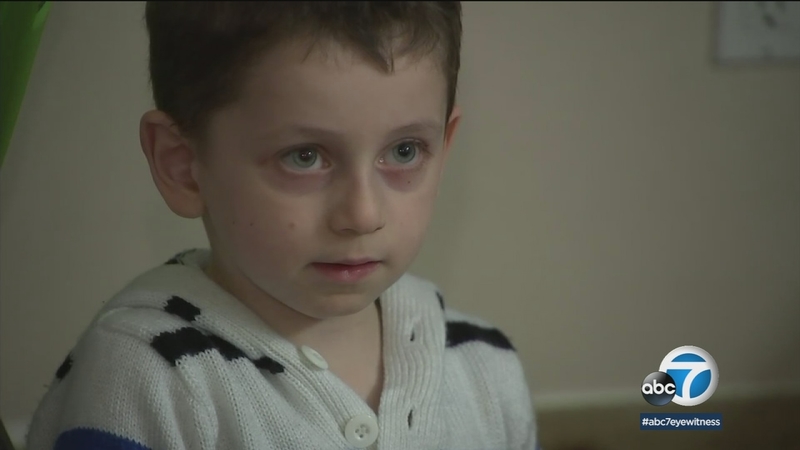 Boy with rare disease to be reunited with parents in Syria

CANYON COUNTRY, SANTA CLARITA (KABC) -- Tony Alsabaa, 6, is about to take a long trip to see his parents in Syria after spending more than a year with his aunt and uncle in Canyon Country recovering from a treatment for a rare disease he suffers from.

Doctors in Syria were not able to treat Tony, who suffers from juvenile idiopathic arthritis, a rare disorder that is complicated by infections and a secondary syndrome.

"I miss my mom and dad. They're stuck in Syria waiting for me all day long," Tony said.

Eyewitness News first introduced Tony last year, when he was 5 years old and during the furor over President Donald Trump's travel ban. Tony's parents were desperate to be with their sick child and Tony was struggling without them.

A year later, not much has changed for his parents. But Tony has changed. Last year, he was much quieter, smaller and wore a back brace. Now he can run around and no longer has the brace.

"The doctor told me that I was doing very good about the running, the jumping," Tony said.

The family of a 5-year-old boy who suffers from a rare disease are begging for help to get his Syrian parents into the states to be with him.

The reason he is doing so well is because of the medical treatment he is receiving here in the states. But come Friday, he will be taking an 18-hour trip through Turkey and Lebanon to see his parents in Syria.

"Happy for his parents. Sad for him because it's not going to be as good condition as it is here. It's not going to be taken care of as he is here about 100 percent. There it will be 50, maybe 70 percent," aunt Fadaa Assaff said.

For more than a year, Fadaa has taken care of her sister's ailing child as if he were her own, shuttling him to several hospital appointments each month and paying for his care. It's a task she never asked for, but gladly did all while working and raising her two children.

There is the risk that Tony could relapse and the family will be back where they started.

He left Syria when he was 4 years old. He is a U.S. citizen and is now fluent in English, but not Arabic.

The family's immigration lawyer, Akram Abusharar, spoke with Eyewitness News and said every attempt to get Tony's parents to the U.S. was denied.

"It is very frustrating. Why? Because this is a kid, and his disease is very unique. (He) cannot get the same treatment if he goes back to Syria. He does not have his family here, especially the parents. The parents need to be here to make legal decisions, medial decisions," Abusharar said.