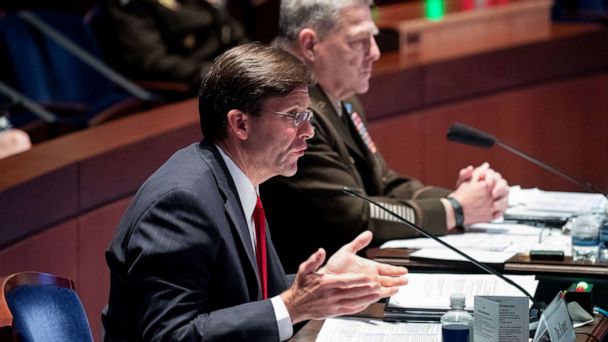 Defense Secretary Mark Esper and Gen. Mark Milley, the chairman of the Joint Chiefs of Staff, said Thursday that the intelligence on the Russian bounty program had not been corroborated by intelligence agencies and that they do not believe any attacks in Afghanistan that resulted in American casualties can be directly tied to it. The U.S. is still looking into the program and Milley warned that if it proves to have been real the U.S. "will take action."

"All the defense intelligence agencies have been unable to corroborate that report," Esper told the House Armed Services Committee.


"As of today, right now, we don't have cause and effect linkages to a Russian bounty program causing U.S. Military casualties," Milley said. "However, we are still looking. We're not done. We're going to run this thing to ground."

If proven true, Milley said "we will take action." Though he also indicated that there have probably been some contacts with Russia about this, on the strategic level, that have not been made public.

"If it is bounties, I am outraged, just like every one of us in uniform is," Milley said. "If these bounties are directed by the government of Russia to kill American soldiers, that is a big deal. We don't have that level of fidelity yet. We are still looking."

Gen. Kenneth McKenzie, the commander of U.S. Central Command, and Gen. Scott Miller, the top U.S. military commander in Afghanistan, became aware of the intelligence in January, according to Esper.

"Neither thought the reports were credible as they dug into them," said Esper, who noted that he became aware of the intelligence report in February.

Esper added that McKenzie and DOD intelligence agencies have not found any links to an April 2019 roadside bomb blast that killed three Marines that, according to some press reports, has been linked to the program.


Earlier this week, McKenzie said he found the intelligence report concerning, but did not believe it was tied to actual U.S. military deaths on the battlefield.

"I found it very worrisome, I just didn't find that there was a causative link there," McKenzie said in an interview with a small group of reporters.

"The intel case wasn't proved to me -- it wasn't proved enough that I'd take it to a court of law -- and you know that's often true in battlefield intelligence," McKenzie said. The general added that he told his intelligence staffers "to continue to dig on it" and that force protection levels for U.S. troops in Afghanistan are always high.

Based on his multiple tours of service in Afghanistan, Milley said he has been aware of Russian meddling in Afghanistan for years, including sending arms supplies to the Taliban. But, he said, "there is a distinction between arming and directing."

"We don't have -- in the case of the Russians -- we do not have concrete evidence intelligence to show directing. That is a big difference," Milley said. "If we did, it would be a different response. We are not done looking. We are going to get to the bottom of this bounty thing."


The reports of a Russian bounty program created a controversy for the Trump administration after it was disclosed that President Trump had not been personally briefed on the information because it had not been "verified." The Associated Press and the New York Times reported that the information was included in the written version of the president's daily intelligence brief in late February.

Democratic members of Congress have countered that he should have been briefed regardless of whether the intelligence was fully analyzed, given that it involved the safety of American troops.

If "it was a credible report that used those words, certainly it would have been brought to my attention by the chain of command, by the chairman of the joint chiefs and others for action," Esper said.

"We would have taken upon that action in an interagency effort to make sure we addressed it," he added. "At all times, we take force protection seriously and we take all of his actions regardless of the credibility of a report. We take all that seriously."
Report a correction or typo
Related topics:
abc newsnational
Copyright © 2020 ABC News Internet Ventures.
More Videos
From CNN Newsource affiliates
TOP STORIES