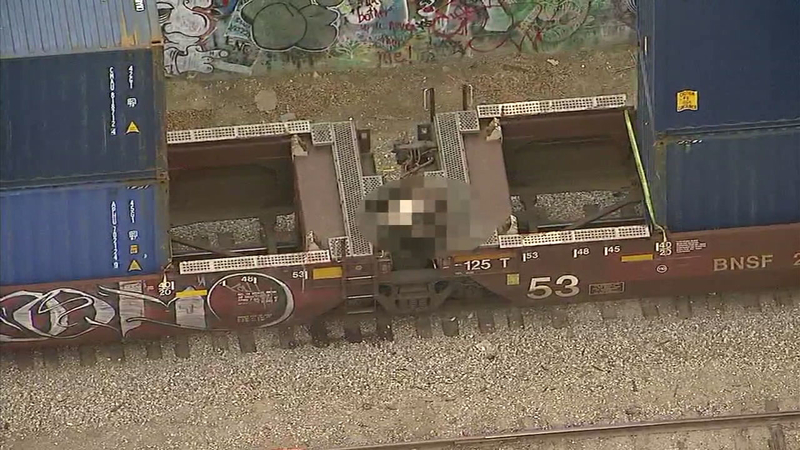 TORRANCE, Calif. (KABC) -- A body was discovered between two train cars in Torrance, prompting a death investigation on Tuesday.

Torrance police officers were called to the area of Del Amo Boulevard and Maple Avenue around 10:10 a.m. regarding a report about a person down on the railroad tracks.

Responding officers discovered a deceased shirtless man kneeling on the coupler between two rail cars, slumped over. There were no immediate signs of gunshot wounds or an obvious reason for his death.

Investigators are trying to determine who the person is and how he died. The body was removed at about 2:30 p.m. for investigation.

"What we do know is that it is an adult male. Race is unknown and, again, identity is unknown. We are working closely with the coroner's office," said Torrance PD Sgt. Ronald Harris.

The scene is just below an industrial park on the west side of the tracks, where workers noticed police flood the area.

"The people with the train company were doing their normal walk of the tracks and the train before they pulled out. That's when they noticed the body and called out to one of our guys out on the lot, asking if we possibly had any video off of our cameras," said witness Robert Cobabe.

Cobabe said investigators spent part of the afternoon pouring over surveillance video from his nearby plumbing business. He said the train had been sitting on the tracks since Sunday, leading him to think the body hadn't been on it very long.