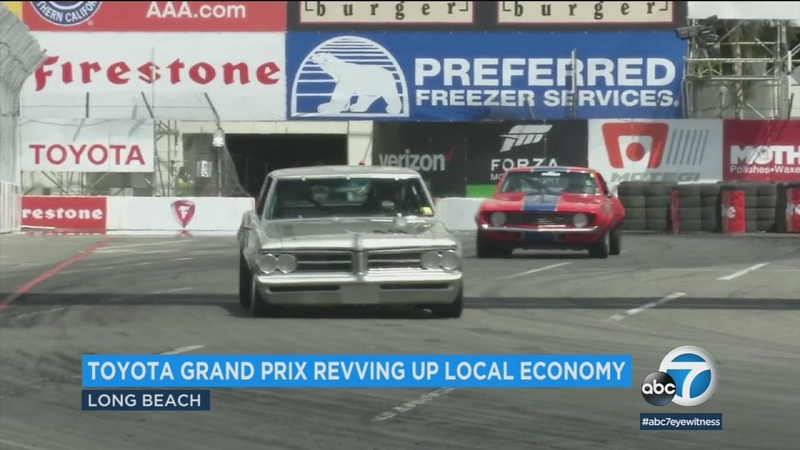 LONG BEACH, Calif. (KABC) -- To some, the cars screeching around the normally quiet streets of Long Beach might just sound like noise. But to race fans visiting the city this weekend, those internal combustion reverberations are the soundtrack to a good time.

"Oh, it's awesome. Come out, have fun in the sun, good family time. We like to come on Friday because it's less crowded," said Alex Lechner, of Riverside, who had his wife and two kids with him.

Zoomer Zamora, of Long Beach, agreed. He's been coming to the races for 30 years.

"It's a lot of racing, and a lot of different types of sports. The food is incredible, and it's a good weekend," he said.

The weekend is not just the main Indycar race, but several others as well. For the Mazda team drivers running in the IMSA series, this is a home event, as Mazda's U.S. headquarters is right down the 405 Freeway in Irvine.

"We got to give out some tickets to some of the Mazda employees, so we'll have them right here in the grandstand in Turn 10. So having them here to cheer us on, hopefully we can get a win, stand on top of the car and thank them for all that they do," said driver Tristan Nunez, who drives for Mazda Team Joest.

This race is not just a hallmark for racing fans, but has seen the city of Long Beach evolve since the event started way back in 1975.

"Over the years, they've gone through a tremendous amount of redevelopment. And yes, we'd like to think we're responsible for a little bit of it," said Jim Michaelian, president and CEO of the Grand Prix Association of Long Beach.

The whole area becomes a virtual "city within a city" for the long weekend. There's a tire store, with lots of Firestones for the Indycar teams to use over the three-day event.

"We have more than 1,500 tires that we brought here. Each car is given up to seven sets of primary tires, four sets of alternates, and in case it rains - which it won't - five sets of rain tires," said Lisa Boggs, director of Bridgestone Americas Motorsports.

Whether you care which drivers are using which tires for how many laps, or you just like to grab a cold one and burger, soak up the sun, and take in all the fun, one thing seems to be the consensus here among regulars.