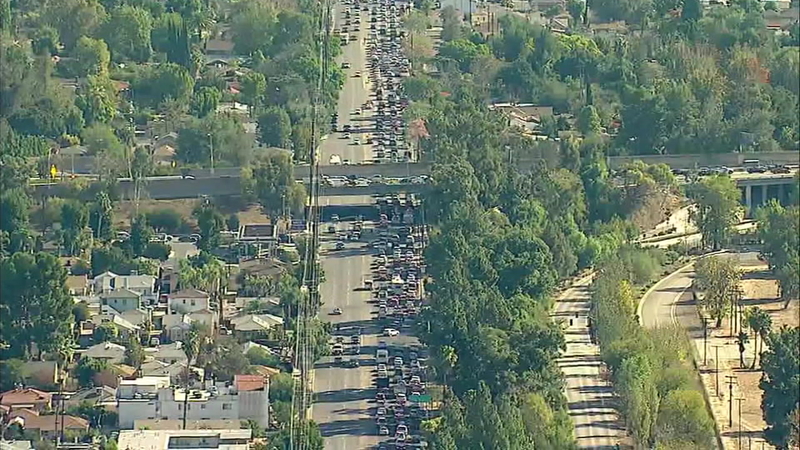 WOODLAND HILLS, LOS ANGELES (KABC) -- With so many canyon roads closed due to this week's brush fires, there appears to be an overflow of traffic on the freeways in the San Fernando Valley all week.

As the days go by and the winds settle down, containment on the massive Woolsey Fire, burning in parts of Los Angeles and Ventura counties, grows. But the reach of the destructive blaze stretches far outside the lines drawn on Cal Fire maps.

Sections of the 101 Freeway, miles and days removed from any flames, are still paying a toll a week after the fire broke out.

So far this week, many drivers say they've been running into some of the worst traffic they've ever seen.

Morning commutes on the eastbound 101 Freeway are considerably slower than usual, and surface roads are jammed, too.

He added that the 101 Freeway was so slow Wednesday, his wife had to cancel her trip downtown.

"She just had to turn around and go home because she couldn't get out of the valley. The traffic was ridiculous," Symson said.

Caltrans officials say they're running the numbers to see if there is any actual evidence of longer commutes, but drivers suspect the numerous road closures because of the fire have funneled more cars onto the 101 and nearby streets.

"They closed Topanga, and Mulholland's closed. The 101 was closed. I work in Santa Barbara, so every day has just been a nightmare," shared Jordan Wyman.

Sherman Oaks resident Stacey Hempel had a different story to tell. Her 101 commute on the westbound side has actually been easier since the fire - and she's not alone.