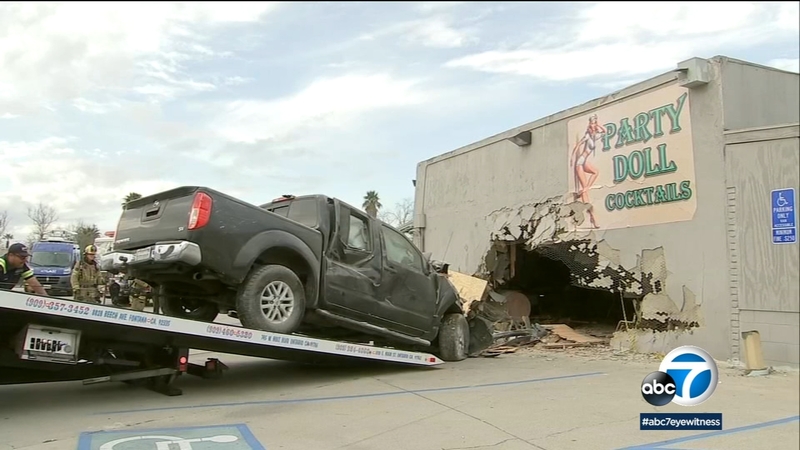 3 hospitalized after pickup truck plows into crowded bar in Highland

HIGHLAND, Calif. (KABC) -- A man was arrested on suspicion of DUI after a truck plowed into a bar in Highland early Wednesday morning and injured three people.

Firefighter-paramedics responded about 12:15 a.m. to a report of a person in distress in the vehicle, and when they arrived on scene the driver sped away. The truck then struck another vehicle and crashed through a wall at the Party Doll bar in the 25400 block of East Baseline Avenue.

About 12 people were inside the building at the time, none of whom were hurt. Three others were transported to a hospital with minor injuries.

This gives new meaning to “Last Call”. A truck slams into a Highland bar. Details coming up on ABC7. @ABC7 #highland pic.twitter.com/WTTRLk09z7

The suspect was identified as 19-year-old James Dailey.

The bar's owner said it was unclear whether the establishment, which dates back to the 1940s, will be able to reopen for business.
Report a correction or typo
Related topics:
traffichighlandsan bernardino countybarcar into buildingcrash
Copyright © 2021 KABC-TV. All Rights Reserved.
More Videos
From CNN Newsource affiliates
TOP STORIES