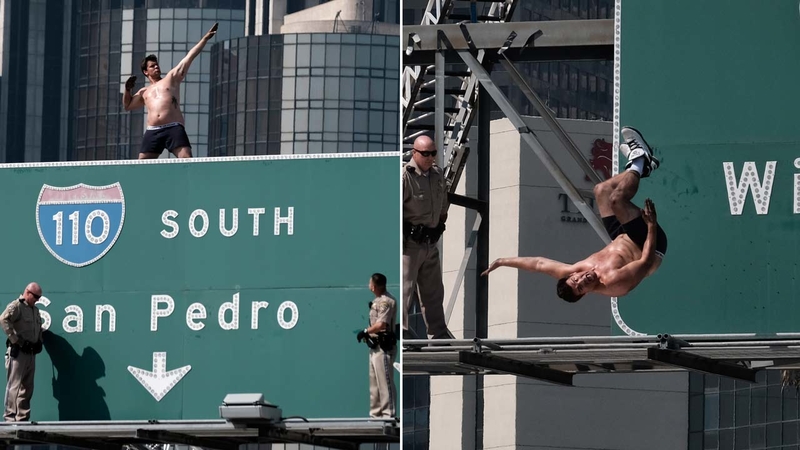 DOWNTOWN LOS ANGELES (KABC) -- The man who snarled downtown Los Angeles traffic by climbing onto a sign over the 110 Freeway is apparently an aspiring rapper looking for publicity.

It all unfolded Tuesday morning around 8:30 a.m. when a man, clad only in sneakers and boxer briefs, scaled a freeway sign and prompted the closure of the southbound 5 Freeway.

A man clad in only boxer briefs and sneakers climbed atop a freeway sign in downtown L.A., snarling morning traffic for hours on Wednesday.

The man, identified as 29-year-old Alexander Dunn, hung huge banners that read "fight pollution not each other," "give a hoot, don't pollute," and "Dephre," which, his producer told the Los Angeles Times, referred to Dunn's stage name of Dephree.

He stayed up there for about an hour, then did a back flip onto a large inflated air bag set up by police.

Dunn was loaded onto a stretcher and taken away by ambulance. He was booked on suspicion of delaying a police officer, trespassing and failure to obey a regulatory sign.

Dunn's producer King Graint, who posted to his Twitter account a video clip that Dunn shot of himself while he was on the sign, told the L.A. Times that the footage would be released tonight as part of a music video.