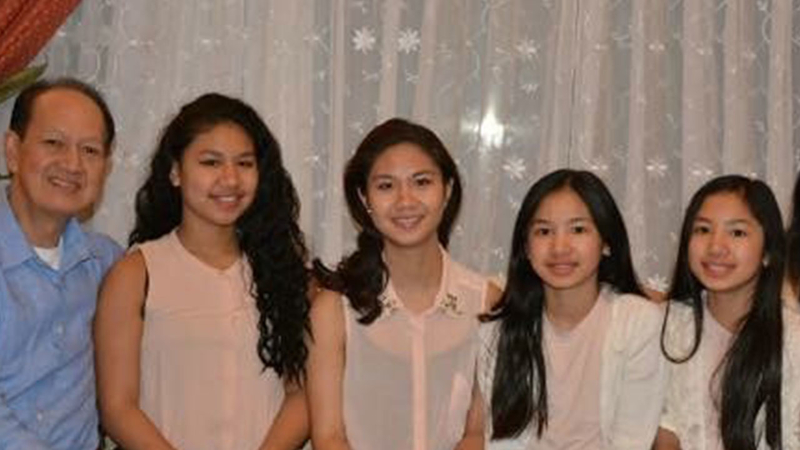 TEANECK, N.J. -- A New Jersey father and his four daughters died when a pickup truck hit their family minivan head-on. The mother survived and was taken to the hospital in serious condition.

The crash happened Friday afternoon on Route 1 in Townsend, Delaware, while the family was coming back from vacation. Police said a pickup truck crossed over the median, drove the wrong way, struck a car, causing it to spin out of control before colliding into the family's minivan.

The wrong-way driver has been identified as 44-year-old Alvin Hubbard Jr. of Maryland. So far, no charges have been filed against him.

On Saturday, the heartbroken community in Teaneck, New Jersey, gathered together for a church service and vigil. A tragedy so unspeakable, it feels like drowning in a sea of sorrow.

Four sisters, Kaitlyn Trinidad, 20; Danna, 17; twins Melissa and Allison, 14 and their father, Audie - a postal worker - were all killed. The girls' mother, Mary Rose, was the only survivor. Her brother-in-law, Danny flew up from Florida.

Danny said his brother was a "God-fearing man" who loves his family.
"He goes to church every Sunday. Loved by his neighbors. So are the kids, they were loved by their classmates and friends. Why?" Danny said.

"It's OK to grieve. It's OK to look and ask questions where there are no answers," said Teaneck Mayor Mohammed Hameeduddin.

On Saturday, the girls' classmates, along with the Filipino American Society of Teaneck organized a vigil, because they are hurting, too - along with all of Teaneck.

A community turning out to Votee Park in Teaneck, NJ for family killed by wrong way driver in Delaware. Father and his 4 daughters were killed. Their mother was the sole survivor. pic.twitter.com/kBcNWajQhD

Hubbard was treated and released from the hospital with non-life threatening injuries.
The girls' mother took care of so many - she is a nurse at Beth Israel Hospital.