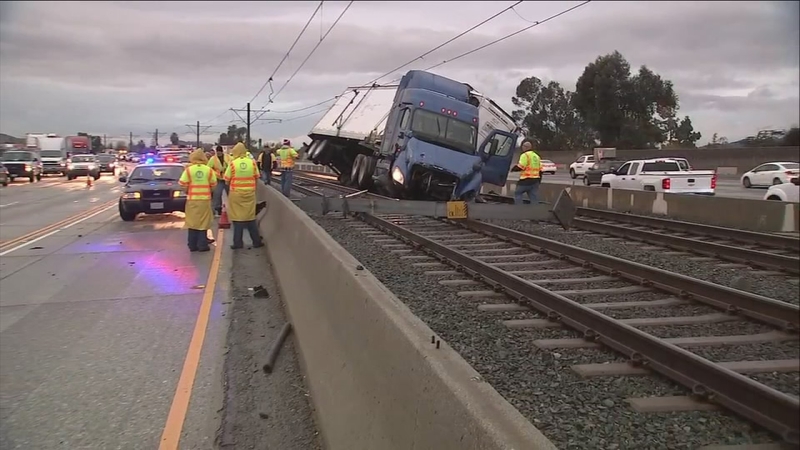 A large truck crashed into the center divider and then careened onto the Metro tracks around 5 a.m. Another car was involved in the crash, but the drivers in both vehicles were not injured, authorities said.

Officer Ryan Bejar said speed was likely a factor in the crash.

"We want to remind people to slow down. I know this is the holiday season and people are in a rush to get to places. But please slow down, take your time," he said.

Traffic on the eastbound 210 Freeway near San Gabriel Boulevard appeared to be at a standstill at one point, but then began moving slowly as crews worked to clear the area.

Metro tweeted out that no train service would happen between the Allen Avenue and Lake Avenue at Sierra Madre Villa stops because of the semi-truck.

The transportation service recommended travelers take the 180/181 or 187 lines at Colorado Boulevard and Lake Avenue. Buses headed out to pick up and transport passengers.

The detour sent commuters into a scramble to board buses that shuttled them around the closure.

"It's stressful because it's different. It's not what we do normally," Alicia Lopez said.

Officials will determine the extent of the damage to the tracks after the truck is removed, according to a Metro representative. The rep added that the problem will be ongoing for most of the day.

A SigAlert was issued, warning drivers that emergency crews would be blocking the carpool lane and farthest left lane.