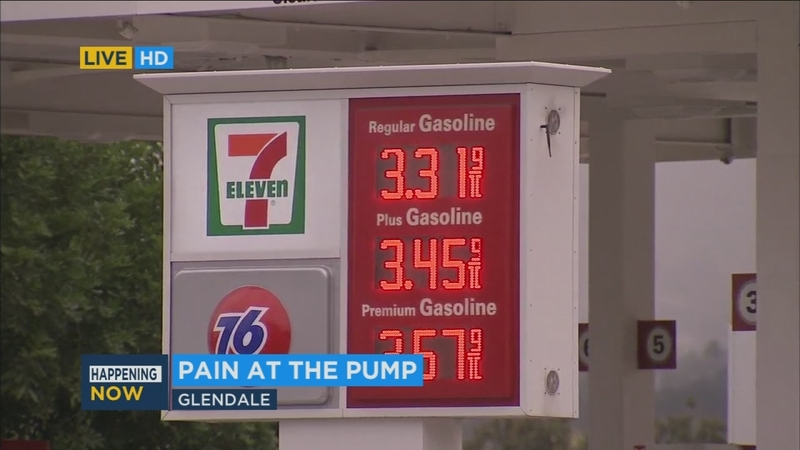 Average price per gallon skyrockets in LA since gas tax

GLENDALE, Calif. (KABC) -- The average price for a gallon of gas in Los Angeles County is up 17 cents compared to last week after a new 12-cent gas tax was tacked on at the pump.

In Orange County, the average price-per-gallon is 18 cents more than it was one week ago.

Some drivers said they are feeling the pain when they fill up, while others are willing to put up with the price increase if it means better roads in the future.

"It's a lot more expensive, especially for the gallon," said Katie Hagar, who is originally from Iowa. "Here I put like $11 and get like three gallons."

Southern California resident Daniel Clark said he sees the difference, but he's hoping the extra that he pays to fill up will pay off in infrastructure improvements.

"Our roads are in terrible shape, so, you know, if they can do some good with the money, it's worth it," Clark said.

The gas tax is expected to generate $52 billion over the next decade in revenue which is meant to be put toward vital repairs to California roads and freeways and fund other transportation projects.
Report a correction or typo
Related topics:
travellos angeles countyglendalelos angelesgas pricestaxes
Copyright © 2021 KABC-TV. All Rights Reserved.
More Videos
From CNN Newsource affiliates
TOP STORIES