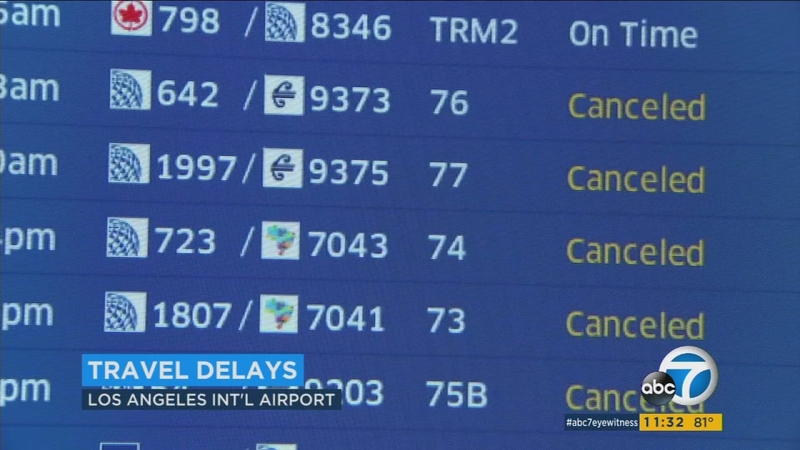 More than 130 LAX flights cancelled due to nor'easter

LOS ANGELES (KABC) -- Amid a powerful snowstorm that was bearing down on the Northeast and the mid-Atlantic on Tuesday, airlines have canceled more than 130 flights that had been scheduled to arrive at or depart from Los Angeles International Airport.

The cancellations were among the 6,000 flights that were grounded across the U.S. due to the late-season nor'easter that was dumping sleet and heavy snow on the corridor between Boston and Washington, D.C.

While conditions in Southern California were marked by sunshine and warm temperatures on Tuesday, electronic displays inside LAX listed cancellations by the dozens.

All flights out of Los Angeles to New York and New Jersey were grounded, as some passengers were told that Thursday would be the earliest day when they could travel to the Northeast by air.

Also affected were flights to and from Washington, D.C., Boston and Philadelphia.

Even attempts to travel to the Midwest presented a challenge. Two Cleveland State University students, who had come to Southern California for spring break, said their airline changed their departure status to "standby" due to uncertainty about flights to Ohio.

"I'd rather not fly - and wait - rather than get in a plane and (have) something bad happen," said Donnetta Monk. "So, I think it's all for the best."