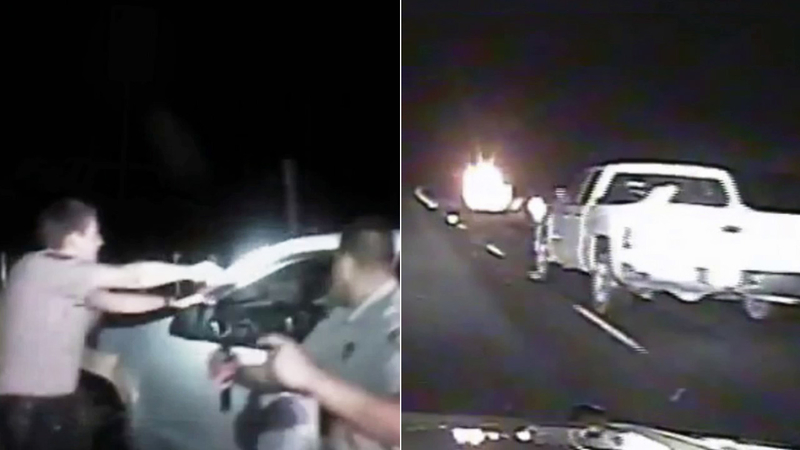 TRINITY, Texas (KABC) -- A wild, high-speed chase in Texas was caught on dash and body cameras. The footage provides a rare close-up look at a dangerous pursuit from several perspectives.

Trinity police chased the suspect for about an hour and a half on May 8. During that time, there was shooting, Tasing and screaming.

From the dash camera, you can hear Trinity police trying to pull over the speeding driver. The white pickup truck was clocked at over 100 mph, refusing to give up.

The dash camera footage shows the pickup finally stopping in a ditch on the side of the road. Officers swarm around him.

From a close-up vantage point, the chaos intensifies.

Officers' efforts to bash in the driver side window fail, increasing their frustration and giving the suspect a chance to get away again.

That's when an officer pulls his gun, shooting for the tires to disable the vehicle.

Officers finally box him in again.

From the body camera footage, you can even get a glimpse of the suspect.

Tensions are sky high as officers successfully break the window and try to pull the suspect out. He won't budge, so you see a Taser pulled and fired.

On another camera, in the middle of the chaos, an officer with a cowboy hat appears, smoking a cigar while the violence ensues.

When it's over, you can see the suspect pinned to the ground. And then, an officer delivers a Texas-sized lecture.

Turns out, the suspect fled form police because he had been drinking.

"All of this crap because you had just a little bit too much to drink," an officer says to the suspect.