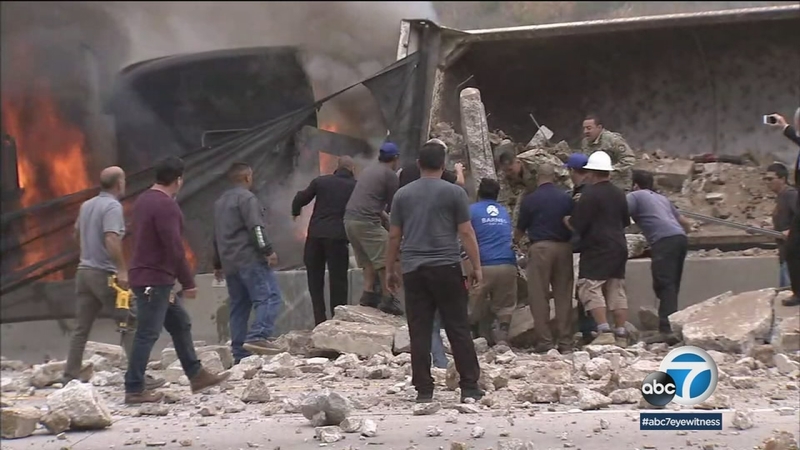 Truck crash on 405 leads to fiery wreck in Sepulveda Pass

LOS ANGELES (KABC) -- A big rig crashed into a car on the 405 Freeway in the Sepulveda Pass, injuring at least three people and closing lanes on both sides of the freeway.

Three people were injured in the wreck. Two of them were listed in critical condition and one was in fair condition. Good Samaritans, including some military personnel, helped pull at least one of the victims from the fiery wreck.

The truck was traveling northbound when the crash occurred, but it went over the center divider into the southbound lanes, spilling its concrete load onto the roadway. The Honda was pinned under the truck and the driver was trapped for some time inside.

Andre Yanez is one of those men who jumped out of his vehicle and rushed toward the burning wreckage to rescue the man trapped. Slabs of concrete connected by rebar from the spilled load were blocking the driver's side.

"We'd shake it like half an inch to the left and right, but we couldn't even get the thing off of anything," he said.

As people used dirt, fire extinguishers and bottle water to try and quell the flames from the truck, Yanez ran down the highway toward utility trucks to look for tools.

"I was looking for a circular saw, a grinder, a cutting wheel or anything," he said.

One person had a saw and Yanez was able to cut the rebar and toss it aside. He said once that was removed, he leaned over and grabbed the man's left arm while someone else grabbed his right and pulled him out of the window.

California Highway Patrol officers said the man suffered burns to 80 percent of his body, but he is expected to survive.

Traffic backed up for miles as the southbound side of the 405 was entirely closed, while at least three lanes were closed on the northbound side.

A big rig crashed into a car on the 405 Freeway in the Sepulveda Pass, injuring at least three people and closing lanes on both sides of the freeway.

Yanez said he missed a job he had to do and so he called his boss to explain what happened.

"I started tearing up because just the sight of seeing somebody with flames around them and they're moving, you know they're potentially almost going to be burned alive. It's pretty crazy," he said.

Less than an hour later, authorities were able to open first one and then three lanes on the southbound side to provide some relief to stuck drivers.

Alternate routes like Sepulveda Boulevard and canyon roads were also jamming up as rush-hour drivers sought to avoid the jammed freeway.

By 9 p.m. all but two lanes on the northbound side and all lanes southbound were reopened to traffic. Sometime around midnight, the rest of the freeway was reopened.

The crash happened just before 3 p.m. near Mulholland Drive.

The cause was under investigation. But the driver of the truck told CHP that another vehicle cut him off, which caused him to change lanes and he struck a car and the center divider.
Report a correction or typo
Related topics:
los angeleslos angeles countycar crashi 405freewaytruck crashtraffictraffic accidentcrashtraffic delay
Copyright © 2021 KABC-TV. All Rights Reserved.
More Videos
From CNN Newsource affiliates
TOP STORIES