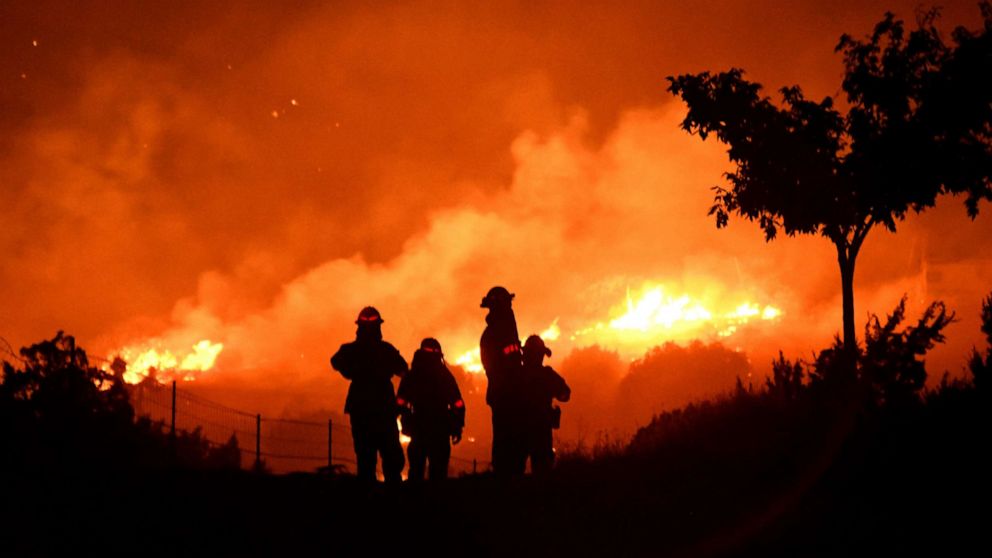 The federal government has reversed course on California's request for a disaster declaration for wildfires that have burned swathes of land across the U.S. state since early September.

The Trump administration had initially ruled against delivering the aid, before later approving it on Friday.

California Gov. Gavin Newsom announced Friday afternoon he had spoken to President Donald Trump by phone and said he had approved the request. "Grateful for his quick response," Newsom said.

"The Governor and [House Minority] Leader [Kevin] McCarthy spoke and presented a convincing case and additional on-the-ground perspective for reconsideration leading the President to approve the declaration," deputy press secretary Judd Deere said in a statement.

Earlier, a spokesperson for the California Governor's Office of Emergency Services confirmed to ABC News on Thursday evening that the request for a major presidential disaster declaration, which would release federal funding, was rejected by the Trump administration. The state plans to appeal the decision. In the meantime, officials are looking for other avenues for federal assistance to support wildfire victims, the spokesperson said.

Federal Emergency Management Agency press secretary Lizzie Litzow told ABC News in a statement earlier Friday that "the damage assessments FEMA conducted with state and local partners determined that the early September fires were not of such severity and magnitude to exceed the combined capabilities of the state, affected local governments, voluntary agencies and other responding federal agencies."

"For example, the state may request assistance from the Small Business Administration, which could provide low-interest disaster loans to homeowners, renters and businesses to meet their recovery needs," Litzow added. "Other federal programs may also become available to aid recovery. But we cannot stress enough, insurance is always the most frequent financial source of help after disasters. If someone has insurance, they should file a claim immediately. The faster they file, the faster their recovery can begin."

FEMA, however, did approve four fire management assistance grants in five California counties for wildfires included in the state's disaster request, according to Litzow.

"These grants will deliver millions of dollars of assistance for emergency expenses and funds to help reduce the risks of future disasters," she said. "If the state identifies additional information to support the request, it may appeal the decision within 30 days."

Newsom penned a letter to Trump on Sept. 28 seeking the disaster declaration for several blazes, including the Creek Fire, the largest wildfire in the state's history, which has burned at least 341,722 acres across Fresno and Madera Counties, as well as the Bobcat Fire, which has burned at least 115,796 acres in the Angeles National Forest in Los Angeles County. Newsom said the fires have collectively torched over 1.8 million acres across seven counties and have destroyed more than 3,000 structures, including nearly 1,000 homes. The infrastructure damage estimates exceed $229 million, he said.

"The severity and magnitude of these fires continue to cause significant impacts to the State and to the affected local jurisdictions, such that the recovery efforts remain beyond the State's capabilities," the governor wrote. "Many of the counties impacted by these wildfires are still recovering from previous devastating wildfires, storms, and the effects of the COVID-19 pandemic."

Last year, Trump threatened to cut federal aid for California's wildfires after Newsom criticized the president's environmental policies during an interview with The New York Times. Trump blamed the Democratic governor for the state's blazes, saying he had done a "terrible job of forest management."

Deere said in a statement early Friday: "This summer, President Trump quickly approved wildfire relief for the State of California that was supported by damage estimates. In fact, this week the President made additional disaster assistance available to California by authorizing an increase in the level of Federal funding to 100% for debris removal and emergency protective measures undertaken as a result of the wildfires, beginning August 14, 2020, and continuing. The more recent and separate California submission was not supported by the relevant data that States must provide for approval and the President concurred with the FEMA Administrator's recommendation."