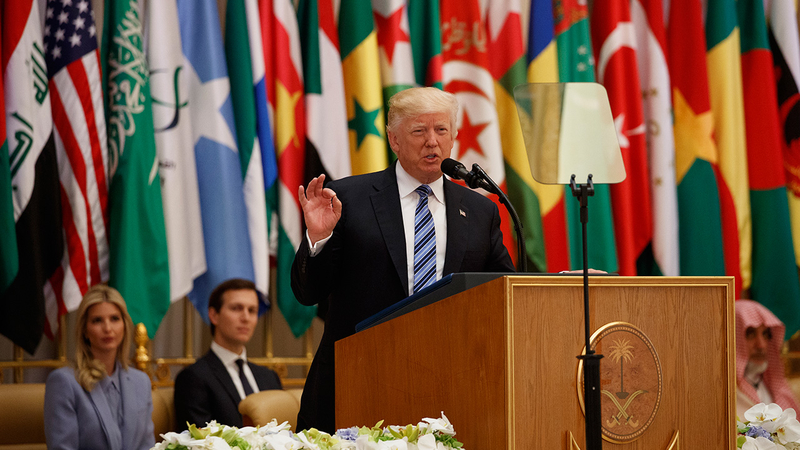 Trump calls fight against terror a 'battle between good and evil'

RIYADH, Saudi Arabia -- Demanding Middle East leaders combat a "crisis of Islamic extremism" emanating from their homelands, President Donald Trump tried to revise his previous anti-Muslim rhetoric while recasting the fight against terrorism as a "battle between good and evil" instead of a clash between the West and Islam.

Trump's address Sunday was the centerpiece of his two-day visit to Saudi Arabia, his first stop overseas as president. During a meeting of more than 50 Arab and Muslim leaders, he sought to chart a new course for America's role in the region, one aimed squarely on rooting out terrorism, with less focus on promoting human rights and democratic reforms.

"We are not here to lecture - we are not here to tell other people how to live, what to do, who to be, or how to worship," Trump said, speaking in an ornate room that featured 11 chandeliers and six giant video screens. "Instead, we are here to offer partnership - based on shared interests and values - to pursue a better future for us all."

Even as the president pledged to work alongside Middle Eastern nations, he put the onus for combatting terrorism on the region. Bellowing into the microphone, he implored Muslim leaders to aggressively fight extremists: "Drive them out of your places of worship. Drive them out of your communities."

The president has been enthusiastically embraced in Riyadh, where the ruling royal family has welcomed his tougher stance on Iran, its regional foe.

Trump slammed Iran for spreading "destruction and chaos" throughout the region, repeatedly castigating the nation - which had re-elected its moderate president the day before - as a breeding ground and financier for terror. His comments were echoed by Saudi King Salman, who declared, "The Iranian regime has been the spearhead of global terrorism."

For Trump, the visit has been a welcome escape from the crush of controversies that have consumed his administration in recent weeks. He's been besieged by a series of revelations about the ongoing federal investigation into his campaign's possible ties to Russia and his decision to fire FBI Director James Comey, who had been overseeing the Russia probe.

Trump's trip to Saudi Arabia also served as something of a reset with the region following his presidential campaign, which was frequently punctured by bouts of anti-Islamic rhetoric. He once mused that he thought "Islam hates us" and repeatedly slammed former President Barack Obama for refusing to use the term "radical Islamic extremism."

Yet Trump himself backed away from the term Sunday as he stood before the region's leaders.

He condemned "Islamists" and "Islamic terror of all kinds," but never specifically referred to radical Islam. He largely kept his voice in check, reading carefully from the TelePrompter as he addressed the crowd, which remained quiet during his delivery. And when he concluded, the American delegation rose to give him a standing ovation - but the rest of the hall did not.

On Sunday, Trump was full of praise for Muslim world's history and culture. He declared Islam "one of the world's great faiths." And he praised the Middle East's potential even as he underlined his own vision of a United States with tighter borders, saying "this region should not be a place from which refuges flee but to where newcomers flock."

White House officials said they considered Trump's address to be a counterweight to President Barack Obama's debut speech to the Muslim world in 2009 in Cairo.

Obama called for understanding and acknowledged some of America's missteps in the region. That speech was denounced by many Republicans and criticized by a number of the United States' Middle East allies as being a sort of apology.

Trump said nothing that could be interpreted as an apology. Instead, he seethed at the terrorists who called the region home, though he offered no solutions to prevent radicalization or entertained any discussion of the sources of disaffection for young Muslims that have led them to turn to violence.

Trump's speech came amid a renewed courtship of the United States' Arab allies. Trump held individual meetings with leaders of several nations, including Egypt and Qatar, before participating in a round-table with the Gulf Cooperation Council and joining Saudi King Salman in opening Riyadh's new anti-terrorism center.

A Sunday meeting with Egyptian President Abdel-Fattah el-Sissi underscored the kinship, with Trump saluting his counterpart on the April release of Egyptian-American charity worker Aya Hijazi, who had been detained in the country for nearly three years.

El-Sissi invited Trump to visit him in Egypt, adding, "You are a unique personality that is capable of doing the impossible." As the participants laughed, Trump responded: "I agree."

The president then complimented el-Sissi's choice of footwear, telling his Egyptian counterpart "Love your shoes. Boy, those shoes" after their brief remarks to the press.

But even as Trump soaked in the adulation in Saudi Arabia, his administration continues to fight for its travel ban that would prevent immigrants from six countries - Iran, Syria, Sudan, Libya, Somalia, and Yemen - from entering the United States, a decision that sparked widespread protests at the nation's airports and demonstrations outside the White House.

That ban was blocked by the courts. A second order, which dropped Iraq from the list, is tied up in federal court and the federal government is appealing.