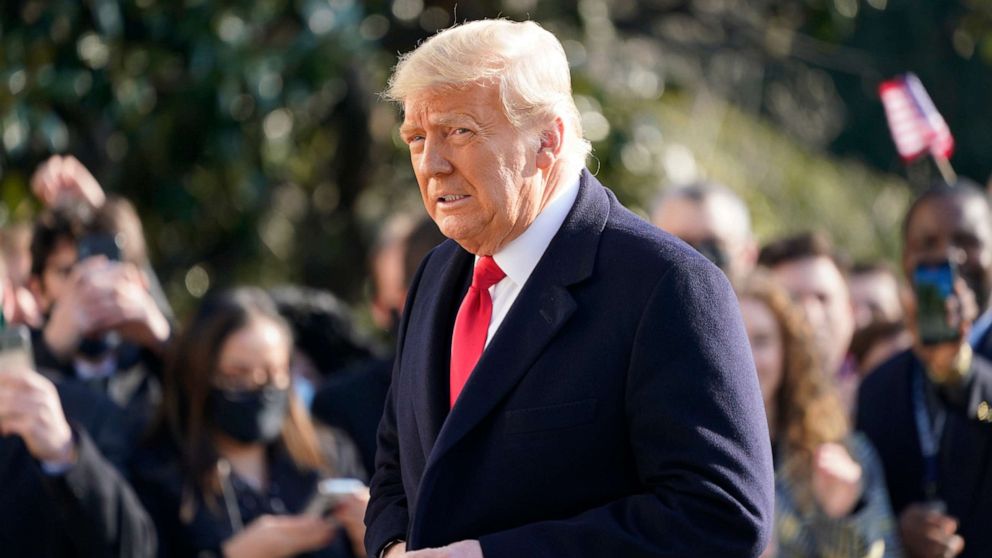 Trump has requested a large sendoff to be planned for the morning of Jan. 20, sources said, after he choppers via Marine One to Joint Base Andrews, where he is expected to give remarks to supporters and departing members of his administration.

Sources add that Trump has requested his departure ceremony to have a "military-like feel," although details are not finalized.

He hopes to depart to the blare of a military band, with a red carpet and military honors, according to sources briefed on the plans. Even some sort of military flyover has been suggested, they said.

The president will then fly down to Mar-a-Lago aboard Air Force One with a small number of staffers who will be part of his post-presidency operation, the sources said.

Meanwhile, it's been revealed that Vice President Mike Pence spoke with Vice President-elect Kamala Harris on Thursday, just six days before the inauguration, according to sources familiar with the call, first reported by The New York Times.

Pence, unlike Trump, is expected to attend the event, according to a source familiar with his plans. His call to Harris came 68 days after Biden and Harris were projected as the winners on Nov. 7.

Thursday's call also is the first known communication directly between the highest-ranking elected officials of the current outgoing and incoming administrations since Trump claimed he won on election night and for months following the vote.

It is unclear if Trump has called Biden to concede. He defiantly announced on Twitter just before the social media platform permanently suspended his account that he would not be attending the inauguration.

Trump's plan to leave the White House the morning of the inauguration, an unmatched break with tradition, would come two weeks after inciting a violent insurrection at the U.S. Capitol that left five dead and his historic second impeachment a week later.