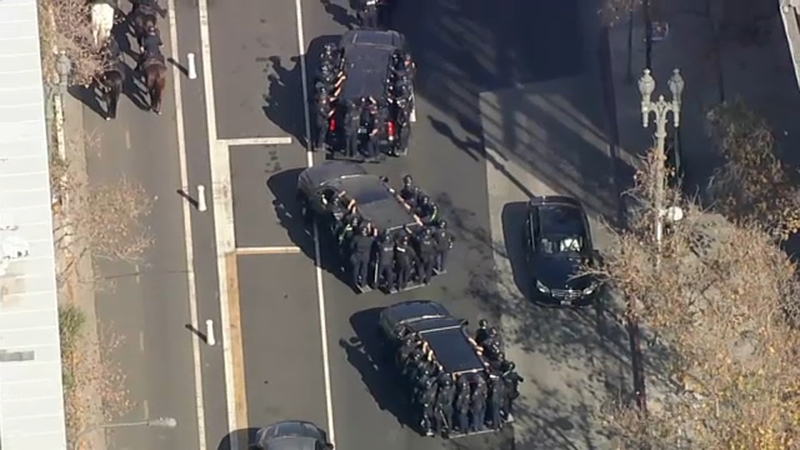 Holding flags and carrying signs that read "Stop the Steal," members of the group stood along Spring Street while others circled the area in their vehicles.

News video from AIR7 HD showed police officers standing in a skirmish line as demonstrators milled about nearby.

As Congress convened in Washington to certify the results of the presidential election, dozens of supporters of President Donald Trump rallied Wednesday morning in front of Los Angeles City Hall.

The demonstration began peacefully, but fights broke out with counter-protestors. The LAPD tweeted that a few people were taken into custody. Earlier in the day, an LAPD officer put the number of people arrested at four.

After the downtown L.A. rally was declared an unlawful assembly, the crowd was ordered to disperse.

Meantime, dozens of Trump supporters also demonstrated in Beverly Hills. One Trump backer said he does not support the violence in the Capitol, and showed up in Beverly Hills to contrast that violence with a peaceful demonstration.

Organizers of the event said 15 "patriotic organizations" were taking part in the demonstration "to demand the integrity and justice of the Nov. 3 election."

Chaos and violence: Social media videos capture clashes between Pro-Trump supporters and police on the frontlines of the U.S Capitol.

Meanwhile, in Washington D.C., supporters of Trump stormed the U.S. Capitol in a chaotic protest aimed at thwarting a peaceful transfer of power, forcing lawmakers to be rushed from the building and interrupting challenges to Joe Biden's Electoral College victory.

One woman was confirmed to have been shot and killed. The National Guard and state and federal police were called in for control, and rare evening curfews were declared in Washington and nearby Virginia suburbs.

"This is a dark day for America," Mayor Eric Garcetti said on Twitter. "The assaults on the integrity of our elections and the safety of the U.S. Capitol are wrong - defying our constitution, our core decency, and our common humanity.

"President Trump must condemn what has happened today, stop illegally contesting the will of the American public, and support the institutions and elected leaders who comprise our democracy," Garcetti said.

After hours of chaos and as the Virginia State Police arrived at the U.S. Capitol Building, Trump called on his supporters to "go home" in a one-minute video message posted to Twitter.

The protesters were egged on for weeks by Trump, who since the November presidential election had launched a barrage of false attacks on the integrity of the results. While rallying his supporters outside the White House Wednesday morning, he urged them to march to the Capitol. But later - hours after they fought police and breached the building - he told them in a video that although they were "very special people" and he backed their cause, they should "go home in peace."

Gov. Gavin Newsom was among the many elected officials who condemned the rioters' actions.

"Peaceful protest is an important mechanism of our democracy, but what we are witnessing in our nation's Capitol building is reprehensible and an outright assault to our democracy and Democratic institutions," Newsom said in a statement.

"The people of California have spoken, and our congressional delegation should never have to fear for their lives to represent Californians."

PHOTOS: Chaos breaks out as Trump supporters swarm US Capitol