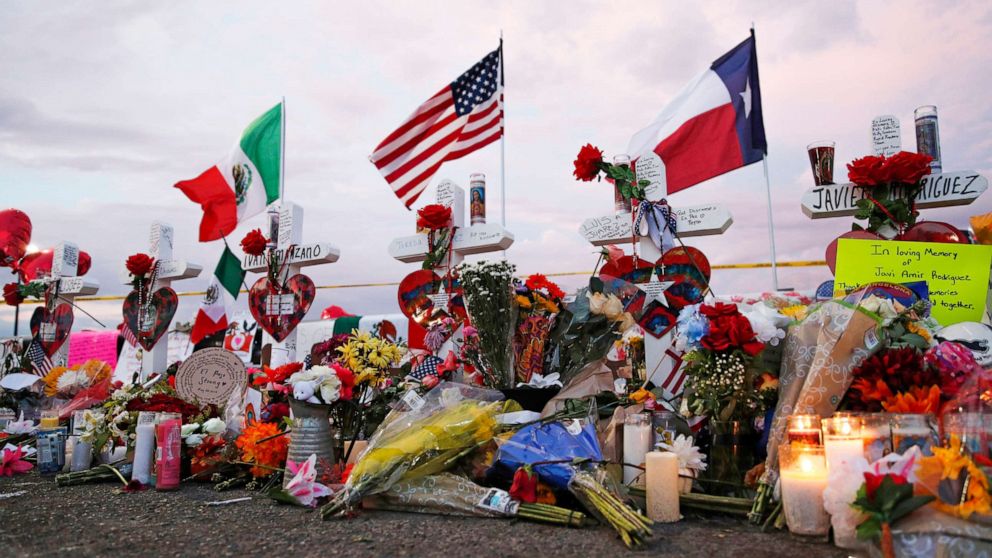 ABCNews
By ELIZABETH THOMAS
"Mental illness and hatred pull the trigger, not the gun," President Donald Trump said soon after the recent mass shootings in Texas and Ohio that left 31 dead.

Under pressure to take action, the president has repeatedly tried to shift the cause of mass shootings away from guns and toward mental illness.

"He's scapegoating people with mental illness as the cause of the problem completely inappropriately," Jeffrey Lieberman, chair of the Department of Psychology at Columbia University, told ABC News.

Trump was asked Wednesday by ABC News' Kyra Phillips why everyone shouldn't have to go through a background check before purchasing a gun.

Jeffrey Swanson, a professor of psychiatry and behavioral sciences at Duke University, told ABC News that the president's remarks are an attempt to avoid talking about guns and instead take advantage of a belief held by many Americans that mass shooting suspects must be "crazy."

"What we know is that the majority of these mass shooters, did not have one of the major diagnosable psychiatric disorders like schizophrenia, bipolar disorder or major depression, that we know of," Swanson said.

According to the American Psychiatric Association, mass shootings by people with serious mental illness represent less than 1% of the yearly gun homicides in the U.S. A 2015 study looking at 235 mass killings determined that 22% of the perpetrators were considered mentally ill. And research shows that people with a mental illness are more likely to harm themselves than others, and are often the victims of violent crime.

"To the extent that there is an association, which there is between gun violence and mental illness, it's one contributor of many contributors, and it's the only one that has a ready solution," Lieberman said. "And the solution is providing better health care."

But mental illness is just one of many motivators of gun violence, experts say. Others include domestic and foreign terrorism, race hatred or ideologies, disaffected loners and disgruntled employees, according to those who've studied mass shootings.

While experts agree that there is a relationship, they say that Trump's comments overstate the correlation. A 2015 study by Swanson found that even if mental illness was completely eliminated as a risk factor, violence would decrease by only about 4%

He argues that Trump's comments tying mental illness to gun violence is part of strategy to create a "them versus us" mentality.

"It's creating this boundary and saying we're on this side, and those people over there are to blame," Swanson said. "What better boundary could you think of then building an asylum and locking them all up in there, and it's just not going to work."

"President Trump's comments about it's all a mental health problem and we need to build more mental hospitals and go back to the asylum movement is just 100% wrong," Lieberman said.

Marvin Swartz, a professor of psychiatry and behavioral Sciences at Duke University, agreed, telling ABC News that while there is a need for more beds in mental institutions, that hospitalization is not a feasible solution to preventing mental illness.

The White House has been briefed on a proposal to develop a way to identify early signs of mental illness that could lead to violent behavior, according to the Washington Post.

When reporters on Wednesday pointed out to the president that other countries with similar levels of mental illness don't have similar numbers of mass shootings -- and why access to guns in the U.S. isn't to blame -- Trump focused his answer on video games.

"There are many, many things in play," he said. "People are talking about videos. People are talking about lots of different things. But we do have a way of bringing what we already have ... we have many, many people that are unable to buy guns right now. Many people are unable to buy guns. We have background checks. But there are loopholes in the background checks."

While experts would be happy to see deficiencies in the mental health system taken more seriously on the federal level, Swanson said it is disappointing that such needs seem to get addressed only after a mass shooting.

"This drives mental health stakeholders bonkers because they really want to have this conversation about improving mental health care in the United States, but the only time we get to talk about it is when there is some horrifying mass casualties," Swanson said.

Swanson added that this puts mental health advocates in a bind. Even though the president is potentially proposing an increase in funding for mental health care, which advocates support, his simultaneously tying improvements to gun violence, Swanson said, is forcing advocates to "make a deal with the devil in order to get something important done."

"It's just the wrong reason. It's really part of a solution to a different problem," he said.

Trump's statements are not only wrong but can discourage those on the fence about getting treatment for their mental illness, according to Swartz.

"His comments are really stigmatizing," Swartz said. "And I think it makes it hard for people to accept that they have a mental illness if they're going to be lumped in with what Trump calls deranged killers."

He added, "There is no correlation between the number of psychiatric beds and the generosity of outpatient treatment and rates of homicide across the country. The only thing that is correlated is the rate of gun ownership in the United States."

There was strong reaction as well from National Alliance on Mental Illness Acting CEO Angela Kimball. "The president should be talking about better care and earlier access to intensive treatment, not revisiting the shameful institutions of our past," she said in a statement.

"Words matter, Mr. President. 'These people' are our friends, neighbors, children, spouses. They're not 'monsters,' 'the mentally ill' or 'crazy people' -- they're us. Talking about reinstitutionalization only further marginalizes and isolates the 1 in 5 people with mental illness. Instead, we need to be talking about the power of early treatment and effective intervention to change lives," she said.
Report a correction or typo
Related topics:
abc newsnational
Copyright © 2020 ABC News Internet Ventures.
More Videos
From CNN Newsource affiliates
TOP STORIES