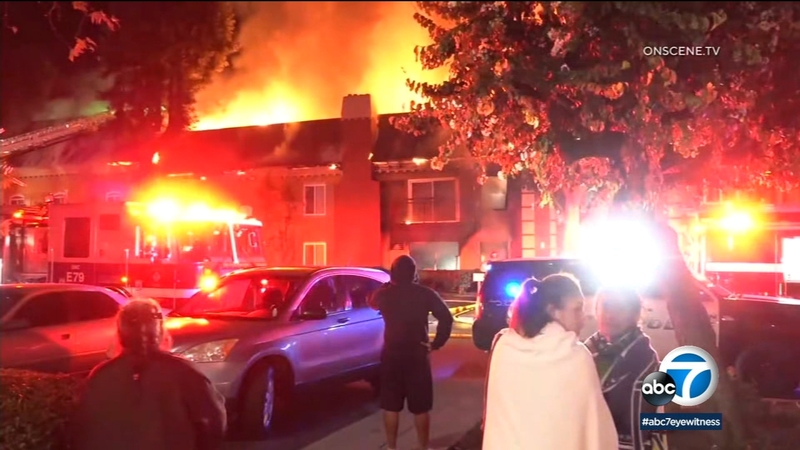 TUSTIN, Calif. (KABC) -- An arson suspect was arrested after a massive blaze at a two-story apartment complex sent plumes of smoke into the sky as more than 100 firefighters attempted to extinguish the flames early Wednesday morning.

The Orange County Fire Authority and Tustin police responded to the intersection of Williams Street and McFadden Avenue at approximately 3 a.m. as crews encountered heavy fire coming from both floors.

Firefighters went into defensive mode as a roof collapsed approximately 45 minutes after the fire erupted. At about 5 a.m., firefighters appeared to make progress on the 5-alarm blaze.

"This fire progressed very quickly," fire Capt. Tony Bommarito said in an interview at the scene. "We had a roof collapse in about 19 minutes, which is very quick for a building like this."
EMBED More News Videos

A 59-year-old man was later arrested on arson charges in connection with the 5-alarm fire.

Patrick Andrew Ceniceros was taken into custody by Tustin police at approximately 8:45 p.m. Police say the man offered information about the fire after going to the police station.

He was questioned by detectives and OCFA investigators. They said he made incriminating statements to them and was arrested.

Fire officials had one person unaccounted for after crews searched the unit where they believe the blaze started. The person, who did not live at the residence, was later located.

At least 62 residents were helped by the Red Cross after they were displaced and two civilians suffered apparent smoke inhalation injuries considered minor. One dog was also found dead, fire officials said.

Fire officials said they are working to determine if the building had working sprinklers and fire alarms.

As many as 120 firefighters were at the scene as the fire rapidly grew in size. The fire damaged about 38 apartment units.

No police officers or firefighters were hurt in the incident.