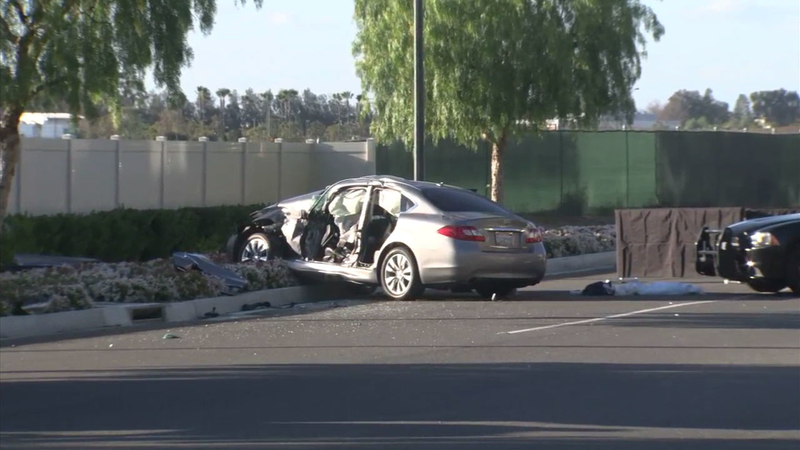 TUSTIN, Calif. (KABC) -- A 17-year-old boy died and six other people were hospitalized after a car rolled over in Tustin Friday afternoon.

Authorities said it happened around 2:45 p.m. in the 16000 block of Legacy Road, between Tustin Ranch Road and Warner Avenue. Seven people were in the vehicle at the time, authorities said.

Police said an Infiniti M37 sedan was traveling eastbound on Legacy Road when it veered off the roadway and crashed into a cement post. That caused the vehicle to spin out of control and hit the back of a parked moving van, which then caused the sedan to roll over.

"One kid was pulled out and he had tons of blood all over his stomach and he wasn't conscious," witness Nicole Lombardo said. "After that, I didn't really want to look, but when I looked in the car there were feet all over."

The other people who suffered injuries and were hospitalized in critical condition were three 17-year-old boys, two 17-year-old girls and a 20-year-old woman.

"We had to use the Jaws of Life to extricate the patients out of the vehicle. Fortunately it took us only 3 minutes to get the doors off the vehicle," Orange County Fire Authority Capt. Larry Kurtz said.

Authorities said speed was a factor in the crash. They also believe at least two people did not have seatbelts on since so many people were in the vehicle.

The identity of the teenage boy has not been released. The investigation is ongoing.