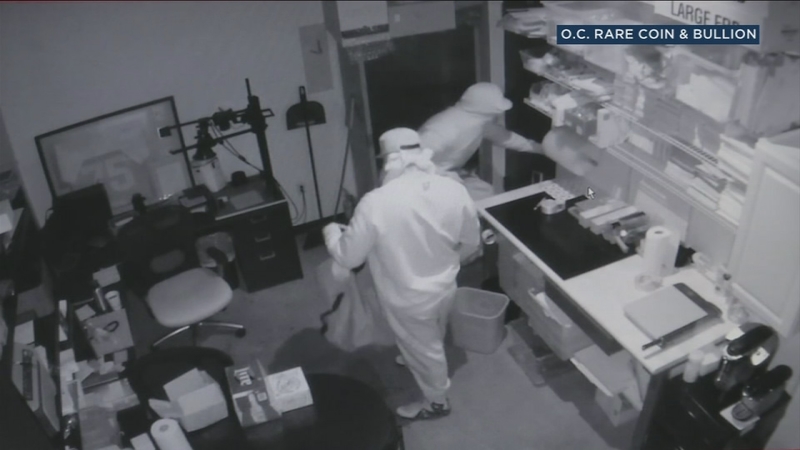 Twin brothers arrested for burglary after pursuit in Costa Mesa

COSTA MESA, Calif. (KABC) -- Identical twin brothers were arrested Sunday morning after a smash-and-grab-burglary at a rare-coin shop that was followed by a brief pursuit in Costa Mesa, authorities said.

Officers responded shortly before 7:30 a.m. to OC Rare Coin & Bullion in the 1900 block of Harbor Boulevard. The owner of the store, Dennis Tarrant, received a call from his alarm company and checked his security cameras on his phone.

"It took about ten seconds and I got an app on my phone and I saw two people running through the back office, taking stuff, so I said, 'Call the police,'" said Tarrant.

The surveillance video shows two men with their faces covered, shattering the glass door, rummaging through the coins and stuffing merchandise into two duffel bags. Tarrant estimates they grabbed around $10,000 worth of items, but it's what they didn't take that surprised him.

When officers arrived, the two men had already fled. An officer located the vehicle at 19th Street and Newport Boulevard. The suspects entered the northbound California State Route 55 at a high rate of speed, and officers initiated a pursuit. The suspects abruptly stopped in the No. 1 lane and went eastbound on foot across the freeway and then across the drainage ditch onto Pullman. Officers then established a perimeter.

An officer heard glass breaking at the 3000 block of Pullman and a broken window was discovered on the side of a nearby building. Officers covering the rear of the building saw both suspects run southbound to the back of another building at the 200 block of Kalmus. The Walkers gave up and were taken into custody without further incident.

Officers arrested Jamal Walker and Jamel Walker, 42-year-old identical twins. Officers found coins, gloves, and burglary tools in the car, police said. The Walkers were each booked on burglary, conspiracy to commit a crime, and evading peace officers with wanton disregard for safety.

Tarrant said he was relieved that the suspects were caught and is now going to add even more security measures.