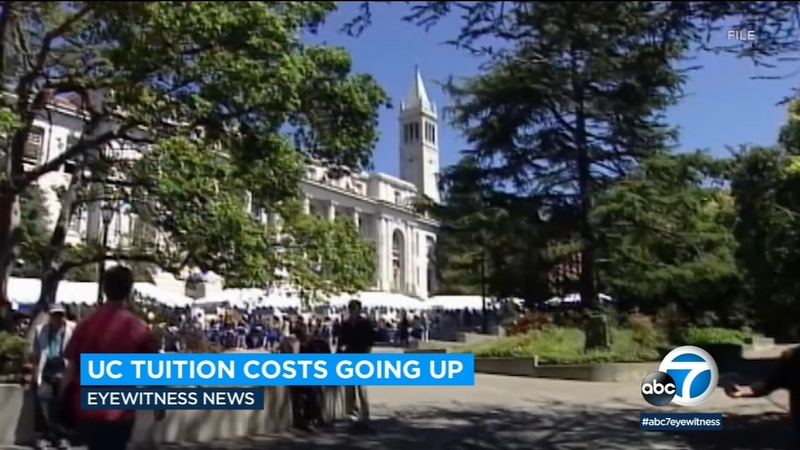 SAN FRANCISCO -- University of California regents on Thursday approved a multiyear plan to raise tuition and fees at the system's 10 campuses.

The proposed increase is the first since 2017 and had been criticized by opponents as a "forever hike." University officials say the increase is needed to maintain the quality of the public university system and provide more financial aid to students.

The proposal calls for tuition and fees to rise by 2% plus inflation for new undergraduates starting in the 2022-23 academic year. UC officials estimate that will amount to an additional $534, putting tuition and systemwide fees at just over $13,000 a year for in-state students. The estimate does not include additional campus-based fees.

That amount would stay flat for those students for up to six years. Increases for incoming freshmen in the following years would gradually decline from 1.5% to 0.5% plus inflation until the 2026-27 academic year, when increases would be based only on inflation.

However, regents also voted to visit the issue in five years, and the board at that time will have to reauthorize the plan. The vote was 17 in favor and 5 opposed.

Kalli Zervas, a senator with the Associated Students of the University of California at Berkeley, said she was "absolutely appalled" that leaders would consider raising costs on low-income students such as herself.

"How dare you parade yourself as a diverse system?" she told regents. "At this rate, you might as well only accept the wealthy students, as you're making it nearly impossible for the rest of us to attend."

Even with an increased $11 billion in the California budget for UC this year, officials say state funding has not kept pace with enrollment growth. State funding has gone from nearly $40,000 a student in 2000 to an estimated $25,200 in 2021, the office says, while enrollment has increased from 171,000 to 292,000 over the same time period.

Gov. Gavin Newsom, a Democrat, warned against tuition increases for both UC and the California State University system in January when he released his initial state budget.

"Right as students and families continue to struggle to recover from the adverse impacts of this pandemic, this proposal would lock-in inequitable fee increases for the foreseeable future," the University of California Student Association said in a statement, calling the proposal a "forever hike."

The University of California has a strong public mission and is invaluable in promoting social and economic mobility, said Erwin Chemerinsky, dean of Berkeley Law, in an op-ed published last year to support the increase.

"For a public university, there are only three choices: the state subsidizes, or tuition goes up, or quality gets cut," he said in an email to The Associated Press. "The only way to make sure that the University of California remains excellent is to ensure that it has adequate funds."

The office of the UC president said in-state tuition and campus fees at comparable public universities in Virginia, Illinois and Michigan average around $17,000, with increases ranging from 24% to 56% since 2011, at the same time UC tuition has gone up 6%.

The Board of Regents was scheduled to vote on a version of the tuition proposal in March 2020, but deferred action amid the pandemic.