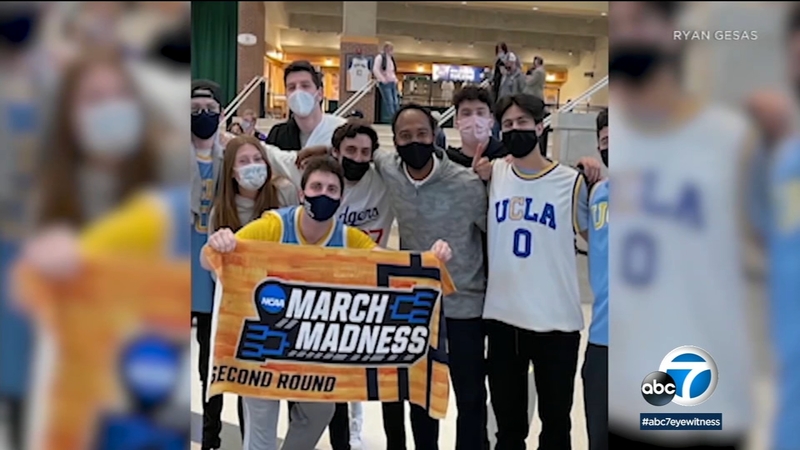 INDIANAPOLIS, Ind. (KABC) -- In a stunning finish to one of the most dramatic games in this year's March Madness, UCLA was knocked out of the college basketball tournament with an incredible last-second shot by Gonzaga.

The heartbreaking loss came courtesy of a deep three-point heave by Gonzaga with less than a second left in overtime and the scored tied at 90 apiece.

After UCLA's Johnny Juzang thought he had forced a second overtime with a putback to tie the score with 3.3 seconds left, Jalen Suggs made the buzzer-beating 3-pointer to send the Bruins home.

"When Johnny got the putback, I didn't have a timeout left so I was running at my guys to get their attention to trap the ball and they got there late," Bruins coach Mick Cronin said.

"It's not their fault because we trained them to get back because Gonzaga is so fast. If you look at the film I was trying to get them to come up so he (Suggs) couldn't get into that shot. Still, it was a bank shot from half court."

After the loss, hundreds of UCLA students flooded the streets of Westwood. At one point, they set some chairs in the street on fire but otherwise there were no serious incidents or injuries reported.
EMBED More News Videos

UCLA students gathered in the streets of Westwood, at one point setting some chairs on fire, but otherwise staying relatively calm, after the Bruins were knocked out of the NCAA tournament.

The loss marks the end of an improbable run to the Final Four by the Bruins.

The undefeated Bulldogs had dominated opponents during the regular season and throughout the tournament - but found the Bruins to be one of their toughest challenges of the season.

UCLA (22-10) played this one in a decidedly different way than they had through their incredible tourney run.

Instead of slowing things down and relying on defense, the Bruins traded baskets with Gonzaga, one of the nation's most prolific scoring teams, and didn't allow the Zags to go on one of their trademark runs.

It was almost enough.

Juzang finished with 29 points to lead the Bruins, an No. 11 seed who started the tournament in the First Four and made it agonizingly close to reaching the championship game against Baylor.

In the first half alone, there were 11 lead changes, with UCLA's biggest margin standing at 6 points, and Gonzaga's at 3.

Regulation time ended in an 81-81 tie, making it the first Final Four game to head to overtime since 1998.

Gonzaga now faces Baylor in Monday's college basketball championship game, after the Bears knocked off Houston 78-59 in the day's other Final Four matchup.

Either way, that game will crown a first-time champion.

It's also the second trip to the championship game for Baylor. The other was in 1948, when the Bears lost to Kentucky 58-42.