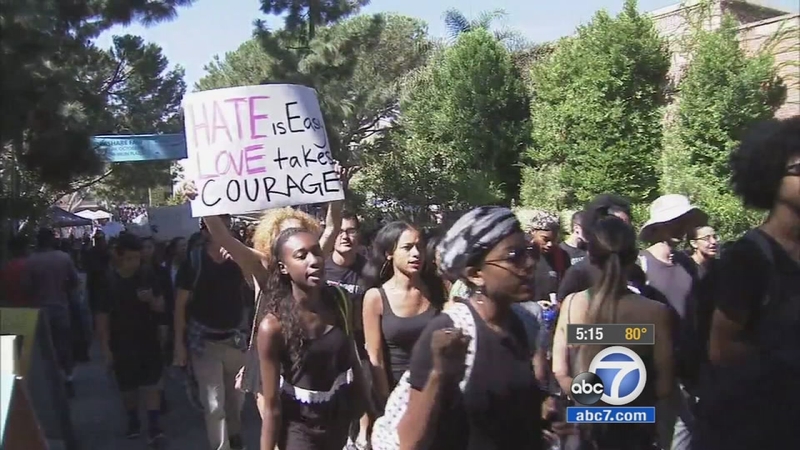 WESTWOOD, LOS ANGELES (KABC) -- A UCLA fraternity and sorority are under fire after throwing a "Kanye Western" themed party, which was viewed by many as being racially and culturally insensitive.

The school's chapter of the Sigma Phi Epsilon fraternity and Alpha Phi sorority held the party on Tuesday night. Guests dressed in baggy clothes to emulate Kanye West or donned plumped lips and padded bottoms to look like the rapper's wife, Kim Kardashian.

Some took to social media to say that certain partygoers had painted their faces black. These allegations have many UCLA students upset.

"It's kind of insane to me," said Adrena Collins, a UCLA student. "I thought the only colors that are supposed to matter here are blue and gold."

Another UCLA student said she thought her fellow students would stoop to that level because they're better than that.

A statement by UCLA Media Relations reminded students that while they are free to celebrate in ways that draw on popular culture, "their specific choices can cause harm and pain" to others.

"Put simply: just because you can do something does not mean you should," the statement read, in part.

The national offices of Sigma Phi Epsilon and Alpha Phi are investigating the incident.

A Sigma Phi Epsilon representative said in a statement that the organization has "zero tolerance for racist behavior" and that the fraternity will work closely with the school to determine the facts.

MORE: Matt Barnes, Derek Fisher get into scuffle in LA

In light of these events, UCLA's Afrikan Student Union held a protest Thursday on campus, which attracted hundreds of students. They protested not only what happened at the party but also how they say black culture is perceived on campus.

Professor Jerry Kang, vice chancellor for UCLA's Office of Equity, Diversity and Inclusion, joined the rally, saying even if the fraternity didn't mean to be offensive, it has to deal with the consequences.

"I really didn't think UCLA students would go down to that level. I thought we were better than that," said Annika Taber, a student at UCLA.