Luiza Tsanava says she was visiting her mother who had cancer in San Pedro when the war started.
KABC
By Jaysha Patel 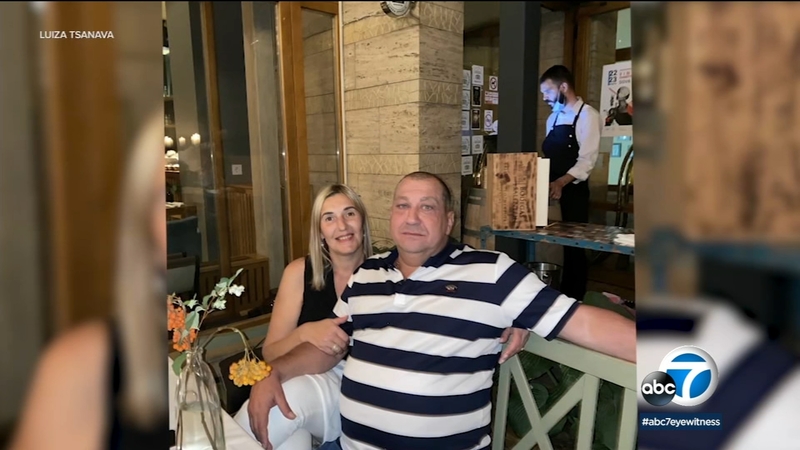 SAN PEDRO, Calif. (KABC) -- Luiza Tsanava and Anzhela Kushnirenko are sisters. Kushnirenko lives in San Pedro and is a teacher. Tsanava lived in Odessa, Ukraine, with her family.

In February, their mother had cancer and was not doing well. Tsanava came to San Pedro from Ukraine to say goodbye. Four days later, the war started in Ukraine.

It was a double whammy for Tsanava. Her mother passed away and she couldn't go back home.

"It's hard to adjust because I don't have work here. My sister pays for everything now and also I don't have medical insurance," Kushnirenko says, translating on behalf of her sister.

Tsanava is currently living with Kushnirenko and her family in San Pedro.

The two told ABC7 Tsanava's daughter was stuck in Europe for a month trying to leave, spending 30 hours at Romania's border at one point.

"In Romania she got tickets to come here but they said because she doesn't have vaccinations even though her COVID test was negative, they didn't let her to be boarded on the plane. So, she stayed in Romania for two weeks to get vaccinations done and then they let her on the plane," said Kushnirenko.

Tsanava's daughter is now staying with them in San Pedro but Tsanava's husband is still in Ukraine. They say because he's under 60 years old, he has to stay in case he has to fight.

Tsanava was a social worker in Ukraine and is hoping to find a job in San Pedro where she can continue doing that. She says she doesn't know when she'll be able to return to Ukraine.

"We love our country and we love our people. Our children are not supposed to suffer and die. Our mothers, they shouldn't lose their children in war," Tsanava said.