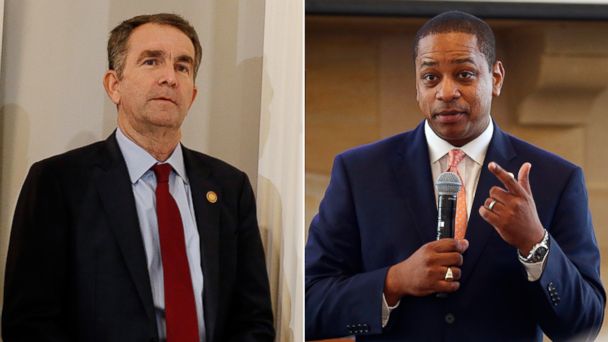 The state of Virginia was mired in uncertainty Tuesday as its governor remained conflicted over his political future following the revelation that a racist photo appeared in his 1984 medical school yearbook, and his lieutenant governor continued to vehemently deny an unconfirmed report about an allegation of sexual misconduct stemming from a 2004 incident.

Allies of Democratic Gov. Ralph Northam say he will continue to try to wait out the firestorm that has engulfed his office in recent days, which has only been amplified by the near universal calls for him to resign from Democratic presidential candidates, both of Virginia's U.S. senators, and party elders including former Vice President Joe Biden and former Secretary of State Hillary Clinton.

"He's said he's taking it day by day," Rep. Donald McEachin, D-Va., one of two African-American members of the state's congressional delegation, told ABC News Monday evening. "I don't know what's going on in Ralph's mind right now. But I think it's going to become more and more apparent that he can't lead."

McEachin also pointed to a major event happening this year in Virginia: the marking of 400 years since the arrival of the first recorded African slaves being brought to the New World in Jamestown.

"This is the 400th anniversary of Africans coming over to Virginia in chains. We're going to have a commemorative ceremony in Jamestown for that. The juxtaposition of that ceremony with a governor that's misled us about blackface, who's been in blackface, is just not a picture that Virginia wants to put forth to the nation and to the world," McEachin said.

Northam met with his top staff on Monday to consider his future, telling them he needs more time to consider what he will do next.

A complicating factor in Northam's future is the high bar for impeachment under the Virginia State Constitution, which leaders in the state legislature say has not yet been discussed.

"I think there's a rightful hesitation about removal from office, because obviously, you have to consider that to some degree you're overturning an election," the Republican Speaker of the Virginia House of Delegates Kirk Cox told reporters on Monday, "I think the constitutional provisions are very specific on the succession of office. It really does call for a matter of physical and mental incapacitation and that's what it was meant to do."

The governor did get a show of support Tuesday from Republican State Sen. Richard Stuart, who said that while he finds the situation "heartbreaking," Northam should have the "opportunity to clear his name."

"We have a tremendous opportunity to teach our children that when you make a mistake, the right thing to do is face up to it and work to make things right, not run away in shame and disgrace," Stuart wrote in a statement provided to ABC News. "Ralph is a man of strong moral character. He will do what is right. The Governor has asked Virginians for the opportunity to earn their trust after this episode. I believe he deserves it."

Northam has not commented on the controversy since an at-times bizarre news conference on Saturday during which he said he did not participate in the racist photo that appeared on his yearbook page, despite releasing a statement on Friday saying that he did.

"When my staff showed me the photo in question yesterday, I was seeing it for the first time. I did not purchase the yearbook and I was unaware of what was on my page," Northam told reporters. "When I was confronted with the images yesterday, I was appalled that they appeared on my page but I believe then and now that I am not either of the people in that photo."

Furthering the chaos is the situation facing the man who would succeed Northam should he step down: Virginia's Lieutenant Governor Justin Fairfax. A 39-year-old African-American and former federal prosecutor, Fairfax is seen as a rising star and potential gubernatorial candidate in 2021.

This morning Fairfax is facing questions after an unconfirmed report surfaced about an alleged sexual misconduct incident from 2004, an allegation he vehemently denies.

"This was 14 years ago ... this was not only from left field, it was from planet Mars because it didn't happen in the way it was described," Fairfax told reporters at an impromptu news conference in Richmond on Monday afternoon.

"The current situation and so it's all completely political, a complete smear," Fairfax said Monday evening as he was leaving the statehouse.

The Virginia Democratic Party released a statement Tuesday afternoon on the allegations against Fairfax that read, "All allegations of sexual assault deserve to be take with profound gravity. We will continue to evaluate the situation regarding Lieutenant Governor Fairfax."

The Democratic caucuses in the Virginia House of Delegates and State Senate released a joint statement Tuesday afternoon that was similarly brief.

"The facts here are still being determined. Every individual deserves the opportunity to be heard, and we respect anyone who comes forward to share their story," the statement read.

Fairfax has remained non-committal on whether or not he thinks Northam should resign over the racist yearbook photo.

When asked Monday whether Northam should resign, Fairfax reiterated his original call for him to "make a decision that's in the best interest of the Commonwealth of Virginia."

"I'm in a unique position obviously answering to the governor...someone who would have to assume the office in the event he were to resign. So I have to be very circumspect. I have to think about the people of the Commonwealth of Virginia," Fairfax added.

Fairfax said he spoke to Northam "probably a couple of days ago," and when asked if he spoke to the governor following his Saturday news conference, Fairfax said, "I don't know. I don't think I have. I'd have to double-check my records."

Fairfax's accuser, whom ABC News is not naming, has retained legal services from the firm Katz, Marshall and Banks, according to a source close to her legal team.

This is the same firm that was hired by Christine Blasey Ford, a California psychology professor who brought forward allegations of sexual misconduct against Brett Kavanaugh, then-President Trump's nominee for the U.S. Supreme Court. Kavanaugh was later confirmed by the U.S. Senate.