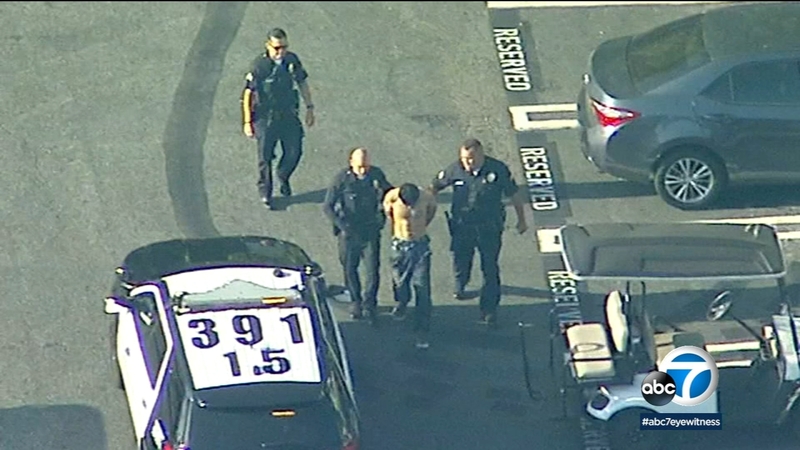 2 in custody after police chase ends at Universal CityWalk

UNIVERSAL CITY, Calif. (KABC) -- A man and woman were apprehended following a short police pursuit that turned into a massive, lengthy search at Universal CityWalk on Friday.

The chase started in North Hollywood around 4:45 p.m. Los Angeles police said the suspects had allegedly stolen a Prius.

The suspects led police into Universal CityWalk, where the driver sped through the busy parking lot of the popular shopping and dining district. The pair then fled on foot somewhere into the retail area.

One of the suspects, an unidentified woman, was quickly taken into custody. The other, a shirtless male, reportedly attempted to break into vehicles in a nearby parking structure. He was taken into custody around 5:45 p.m.

Police said cameras inside the garage were used to search for the man.

CityWalk employees who were inside the structure said they were told to lock their cars, while many were not allowed inside the garage while authorities searched car-by-car for the second suspect.

AIR7 HD was overhead as authorities were seen rushing into the Sketchers store where at least one of the suspects was initially believed to have fled.

Many shoppers - including families with young children - were walking around the area, which is one of the most popular tourist destinations in Southern California.

Dozens of cars filed out of the popular shopping promenade after being given the all clear more than an hour after the search began.

The pursuit was reminiscent of another chase back in 2010 that also came to an end at CityWalk. It was nearly the exact same spot, but that one ended in gunfire. Shots were first fired on Barham Boulevard when the driver appeared to be pinned in, but took off. One officer shot out the driver's window from just feet away. He made it to Universal Studios, where he got out armed with a knife. Police fired again, this time hitting him in the stomach. He was treated and later charged.
Report a correction or typo
Related topics:
universal citylos angeles countypolice chasepolice
Copyright © 2022 KABC Television, LLC. All rights reserved.
TOP STORIES
LA County hospitalizations reach highest number since March
20-year-old killed in San Bernardino shooting remembered as 'good kid'
78,000 pounds of infant formula arrives in US
COVID-19, shootings: Is mass death now tolerated in America?
24-hour closure planned on 101 Freeway east of downtown LA
Encino clinic open to parents, children looking to get vaccinated
Snorkeler finds $2,000 dentures in Gulf - reunites with owner
Show More
SoCal homeowner shoots, kills suspect during home burglary
ABC7's Dallas Raines honored at 72nd annual Golden Mike Awards
Fate of 2,500 Ukrainian POWs from steel plant stirs concern
Biden pushes economic, security aims as he ends South Korea visit
'Absolutely terrified' teen boy dies hours after 'sextortion' scam
More TOP STORIES News