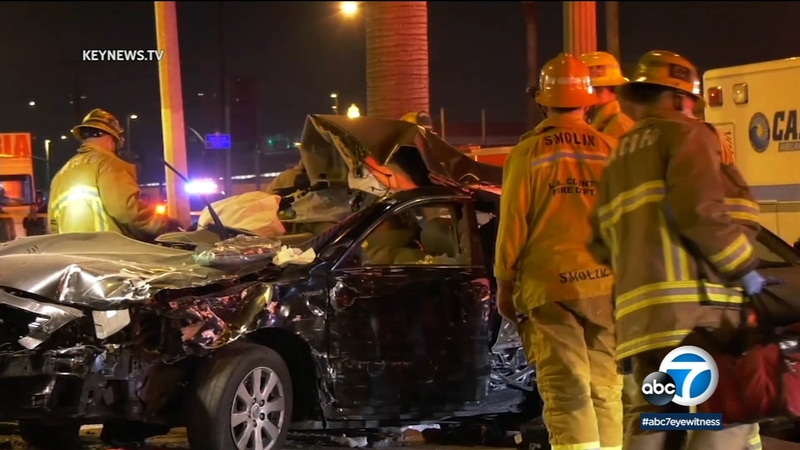 LOS ANGELES (KABC) -- An unlawful assembly was declared Sunday night after authorities say a "combative'' crowd of 150-200 people gathered at the scene of a crash that killed three people in South Los Angeles.

Four people were in the vehicle, which was traveling at high speeds. The driver lost control of the car and went careening into two parked cars before slamming into what appeared to be a brick wall connected to a Wells Fargo bank. A window on the side of the bank shattered on impact. Debris was still scattered on the sidewalk Monday morning as crews worked to clear the scene.

The three victims, who were -- pronounced dead at the scene, according to the CHP log -- have not been identified. The fourth person is expected to be OK.

Video captured a large crowd at the scene, including a person who appeared to shove an officer. The situation became chaotic and unruly, and a videographer at the scene said the crowd became aggressive toward officers.

Footage showed a woman running around an officer who chased her down the street.

The Los Angeles Sheriff's Department declared an unlawful assembly and shut down the surrounding area during the investigation of the crash.

Firefighters were called just after midnight to attend to a family member of the deceased who collapsed, the CHP said.

Authorities said street racing is not suspected in the crash.