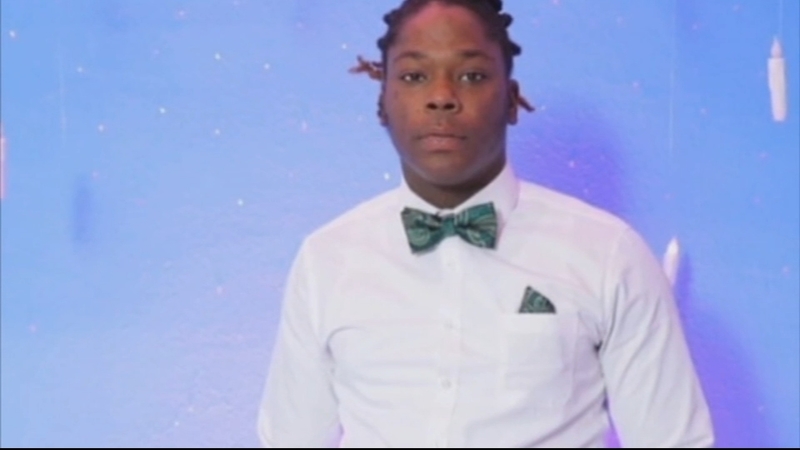 PHILADELPHIA, Pennsylvania -- Police shot and killed a man in Philadelphia, Pennsylvania, Monday afternoon after yelling at him to drop his knife.

It happened around 3:50 p.m. when officers responded to a domestic call.

Sgt. Eric Gripp, a spokesperson with the Philadelphia Police Department, says officers confronted a man with a knife at the scene. Gripp said the man was shot multiple times by two officers after he didn't adhere to calls to drop the weapon. He was later pronounced dead.

Neighbors have identified the man as Walter Wallace.

Video of the fatal confrontation recorded by a bystander and posted on social media shows officers pointing their guns at a man as he walked in the street and around a car. The man walks toward the officers as they backed away from him in the street, guns still aimed at him.

Police shot and killed a man on a West Philadelphia street Monday afternoon after yelling at him to drop his knife.

Both then fired several shots at the man, and he collapsed in the street. A woman ran up to the victim and began screaming. Several bystanders then walked up to the man who was shot.

It is unclear in the video if the man had a knife. Witnesses said he was holding one.

At least a dozen evidence markers were found at the scene. Witnesses and neighbors want to know why less-lethal force wasn't used.

Video shows officers yelling 'put the knife down' before fatal shooting of Walter Wallace on October 26, 2020.

By Monday night, a group of residents took to the streets protesting Wallace's death. Officers could also be seen setting up a perimeter around a police station.

Cops cars and dumpsters were later set on fire as police struggled to contain the crowds. More than a dozen officers, many with batons in hand, formed a line as they ran down a street chasing protesters away from the main thoroughfare.

Growing crowd of protestors flocking to 55th and Pine. We just saw another large group of protestors coming down Pine at 53rd @6abc pic.twitter.com/f9Bh8UA9lf

Video also shows broken windows and vandalized vehicles. A group is also believed to be responsible for broken windows at a number of buildings, including a police station and a Starbucks.

Destruction is being reported in Philadelphia after police shoot and kill a man on Monday afternoon.

Philadelphia Police Commissioner Danielle Outlaw says the video raises questions but she assured the community that a full investigation is underway.

"I have directed the Officer Involved Shooting Investigation Unit to begin its investigation. I recognize that the video of the incident raises many questions. Residents have my assurance that those questions will be fully addressed by the investigation. While at the scene this evening, I heard and felt the anger of the community. Everyone involved will forever be impacted. I will be leaning on what the investigation gleans to answer the many unanswered questions that exist. I also plan to join the Mayor in meeting with members of the community and members of Mr. Wallace's family to hear their concerns as soon as it can be scheduled."

Residents tonight protesting outside Southwest Detectives at 55th and Pine... police say 27 year old Walter Wallace was armed with a knife and didn’t drop his weapon. More than a dozen shots were fired. He died. Residents feel this could have been handled differently @6abc https://t.co/7PIPapzzLE pic.twitter.com/hlUvuRWNHu

The names of the officers who fired the shots were not immediately disclosed. Both were wearing body cameras and were taken off street duty pending the investigation.

"Our police officers are being vilified this evening for doing their job and keeping the community safe, after being confronted by a man with a knife. We support and defend these officers, as they too are traumatized by being involved in a fatal shooting. We ask the public for its patience as investigators work to gather all the facts of this tragic incident in West Philadelphia today," McNesby said.

Emotions are running high among a growing crowd of neighbors, many of whom witnessed the officer involved shooting. @PPDCommish spoke with some of them on scene. Full video on my Facebook page @6abc https://t.co/qCAYVqN37a pic.twitter.com/IVJ40nCxB2

A large crowd gathered where the man was killed, with video showing many yelling at the police officers and crying. Some people later spoke with Outlaw, who arrived at the scene a short time after the shooting occurred.

"My prayers are with the family and friends of Walter Wallace. I have watched the video of this tragic incident and it presents difficult questions that must be answered. I spoke tonight with Mr. Wallace's family, and will continue to reach out to hear their concerns first-hand, and to answer their questions to the extent that I am able," said Mayor Jim Kenney after the shooting.

At least 30 police officers were injured overnight after tensions following the incident boiled over across West Philadelphia.

Officials said one officer was admitted to the hospital with a broken leg and other injuries after being struck by a pick-up truck around 12:45 a.m.

Police said an additional 29 officers sought treatment at area hospitals for injuries, most from being struck by debris. Those officers have all reportedly been treated and released.

More than 30 people have been detained with several arrests reported as of Tuesday morning.