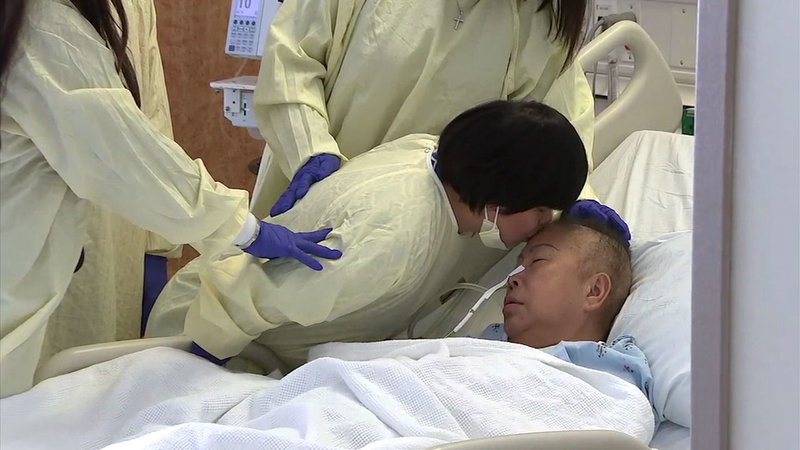 IRVINE, Calif. (KABC) -- A Garden Grove family said their mother is near death because the U.S. government is preventing her from being saved.

Helen Huynh is in extreme pain as she lies in the intensive care unit at UCI Medical Center. She is surrounded by her family, who are not just praying but fighting with her. While Helen's opponent is cancer, her family's is the government.

The family is from Vietnam and they were invited to move to the U.S. in 1991 because Vien, Helen's husband of 35 years, fought alongside the U.S. Army in the Vietnam War.

He said he delivered pizzas and newspapers, ironed shirts for $0.15 each and Helen collected recyclables. Together they built a life from scratch in Garden Grove and supported three daughters.

One of those daughters, Tiffany, has Down syndrome.

Through the years, they lived the American dream and grew as a family. But early this year, it happened.

"Feb. 14, and it's an easy day to remember, I took her to the ER and that's when we found out that she has leukemia," Yvonne said.

Doctors said healthy stems cells can save Helen. Finding a match, however, was extremely difficult. But they found one - Helen's sister, Thuy.

"My aunt happened to be the exact match - 100 percent," Yvonne said.

"We were very happy. My mom was ecstatic. The doctors were very happy because it's very hard to find a match, and especially a 100 percent match," she said.

The family simply had to get Helen's sister to the hospital for the procedure and that's where it all fell apart. Thuy lives in Vietnam and the U.S. government will not allow her into the country.

"We have letters from the hospitals stating that she is a match and that she is coming to the U.S. to donate for the stem cell transplant. The letter from the City of Hope stated that they are requesting a medical emergency visa," Sharon said.

Four months ago, Helen was healthy and ready for her sister's stem cells. But on Friday, she is near death. All she needed was her sister by her side.

Thuy even went to the U.S. Embassy in Ho Chi Minh City for interviews and described to her sisters what happened there.

"The interviews were probably three minutes. They're not even looking at the supporting documents or looking at our situation," Sharon said.

Three formal requests were all denied. The reason for the denials was that even though Thuy is leaving behind money, property and her 5-year-old child to save her sister's life, officials said they do not believe that's enough to "compel her to depart the U.S. at the end of her temporary stay."

Yvonne asked if this would happen had the family been different.

"If we were an Italian-American or a Scottish-American, then our family member could just come on the plane and come here anytime. They could come and go to Disneyland if they wanted to," Yvonne said.

Sharon said her mom hasn't even been given a chance to fight for her life.

They've exhausted every option, but time is slipping away and their disappointment is visible.

"My mom is like my best friend. It's not very easy to see my best friend go through so much pain like this," Sharon said. "Just to see her be on morphine and just lay there in and out of consciousness is very hard on our family."

An American citizen is dying because her country refused to save her even after everything her family did.