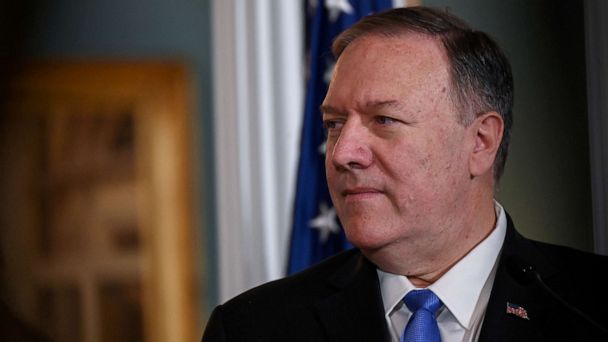 Secretary of State Mike Pompeo said Wednesday the measures target those "who are believed to be responsible for, or complicit in, the detention and abuse of Uighurs, Kazakhs, or other members of Muslim minority groups" in Xinjiang, China.

The Trump administration has denounced China's actions in Xinjiang for a little over a year, but no official action had been taken till now.

Last week, Customs and Border Patrol (CBP) issued a detention order against a Chinese apparel company with ties to the United States, claiming the company produced its products using forced labor in Xinjiang.

The State Department announced on Wednesday it would ban certain Chinese officials and their immediate family members from obtaining U.S. visas, citing their ties to human rights violations in Xinjiang.

The Chinese government is accused of turning Xinjiang into a mass-surveillance state -- where the U.N. says it has detained over a million Muslims, some of whom are allegedly subject to forced labor according to the U.S. Department of Commerce.

Contrary to their title, human rights experts refer to these centers as "re-education camps," while others call them "internment" or "concentration" camps. These camps currently house over a million Muslim people, according to the United Nations.

"These are truly internment camps where these people are being treated in ways that are fundamentally inconsistent with what China would have you believe, and in ways that - when the world finds out - we will all regret," U.S. Secretary of State Mike Pompeo told ABC News earlier this year.

ABC News has spoken to several sources who claimed to have been in the camps. Each described different forms of torture -- ranging from sleep deprivation to starvation. The Chinese government has denied all allegations of torture within these facilities.

CBP issued detention orders on goods imported from five countries based on allegations that people producing those items might be children or adults subjected to forced labor. The orders are used to hold shipping containers at U.S. ports of entry until CBP can investigate the claims of wrongdoing.

Heitan Taida, a Chinese apparel company, was one of the companies slapped with detention orders. Last year, The Associated Press reported that Heitan Taida was forcing Muslims to sew garments for U.S. importers inside a Chinese re-education camp.

Hetian Taida did not respond to emails from ABC News Wednesday. In a previous conversation with the AP, Wu Hongbo, the company's chairman, said that although Hetian Taida was located in a compound shared by a camp, Hetian Taida was not involved in the camp's activities.

Additionally, the Washington-based Worker Rights Consortium published further evidence this year that Heitan Taida was doing business both inside a camp and at nearby state-subsidized factories where detainees are allegedly sent once they are released.

Last month, Costco began importing baby pajamas made by Heitan Taida, according to shipping records reviewed by the AP. Costco said in a statement that it received products from Heitan Taida factories outside Xinjiang, adding that Costco's supplier "also sourced sleepers from a factory in Xinjiang, but Costco has not received any of those sleepers."

Acting CBP Commissioner Mark Morgan said the detention order "shows that if we suspect a product is made using forced labor, we'll take that product off U.S. shelves."

The 28 entities blacklisted Monday by the Trump administration include companies that specialize in artificial intelligence, voice recognition and data collection that have allegedly helped construct mass-surveillance state in Xinjiang.

One of the companies involved "in the implementation of China's campaign of repression, mass arbitrary detention and high-technology surveillance," as stated in the filing, is Hikvision, a video surveillance manufacturer with an estimated market value of $42 billion, according to Reuters.

Hikvision considers itself the world's largest maker of video surveillance gear. Earlier this year, it was rumored the company would find itself on a U.S. blacklist due to the Trump administrations' rising concern that Hikvision had a role in turning Xinjiang into a mass-surveillance state.

A Hikvision spokesman told ABC News the company "strongly opposes" the Commerce Department's decision, stating that in January it retained a human rights expert and former U.S. ambassador to advise the company on human rights compliance.

"Punishing Hikvision, despite these engagements, will deter global companies from communicating with the U.S. government, hurt Hikvision's U.S. businesses partners and negatively impact the U.S. economy," the spokesperson said.

A recent Human Rights Watch report found that a mobile app used by Chinese authorities in Xinjiang to communicate with a network used to store citizens' personal information and report "suspicious activity" -- such as collecting money for a mosque "with enthusiasm."

The Department of Commerce announced the 28 additions to its entity list just days before high-level Chinese and American officials meet in the nation's capital to discuss trade war remedies. U.S. officials said the announcement was not tied to trade talks.

China's Foreign Ministry found the reasons for the Department of Commerce's announcement to be "nothing more than fact-distorting gibberish, which only further reveals the country's malicious intention to impede the counter-terrorism efforts in Xinjiang and stability and development in China," according to spokesperson Geng Shuang.

The Chinese embassy in U.S. tweeted a response to the visa bans Tuesday, stating, "Xinjiang does not have the so-called human rights issue claimed by the U.S."

The embassy went on to say that any actions the government has taken in Xinjiang fall within Chinese law and international practices.

"The counter-terrorism and de-radicalization measures in Xinjiang are aimed to eradicate the breeding soil of extremism and terrorism," the tweet said.

U.S. officials told ABC News these actions are separate from the administration's trade talks with China.

Investors, however, find the timing of these sanctions questionable, according to Mark Zandi, chief economist of Moody's Analytics.

"The [sanctions] may or may not be related to the trade war, but investors think they are," said Zandi. "Moreover, they are likely complicating the trade negotiations, which are already a Rubik's cube."

According to Zandi, the trade war has already cost close to 350,000 U.S. jobs. If President Trump follows through with tariff hikes on China in the next few months, followed by China's retaliation, Zandi said employment could be down by 900,000 jobs by the end of 2020.

"It is likely that if there is another round of tariff hikes in the next few months, the trade war will escalate even further, and a recession would ensue," said Zandi.
Report a correction or typo
Related topics:
abc newsnational
Copyright © 2020 ABC News Internet Ventures.
More Videos
From CNN Newsource affiliates
TOP STORIES