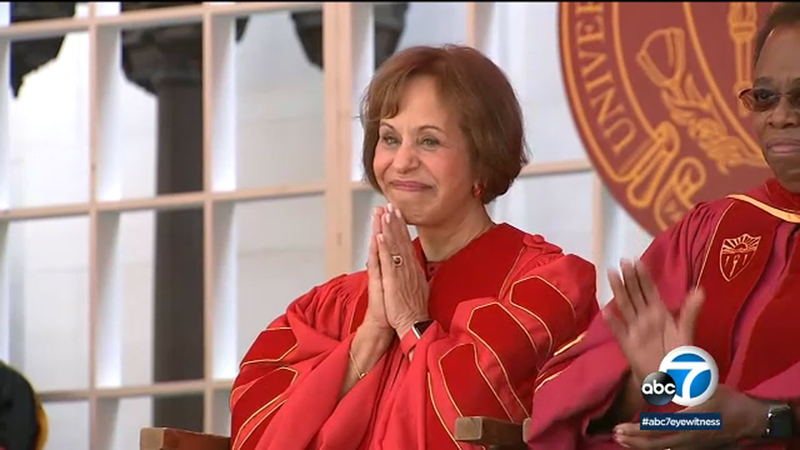 LOS ANGELES (KABC) -- It was a day for USC to fly its colors and look to the future. The school on Friday formally inaugurated its 12th president and its first female president, Dr. Carol Folt.

Folt most recently was the head of the University of North Carolina at Chapel Hill.

"Today we are turning the page at USC," Folt said. "We are starting a new journey."

Folt comes as the school deals with some troubling scandals in its past.

"The truth is the university at times did not listen well enough," Rick Caruso from the USC Board of Trustees said. "It did not always hear the voices that matter the most to us, and that struck at the very foundation of honor and integrity on which this institution was built."

Folt takes the helm as USC is still dealing with the aftermath of the sexual misconduct allegations against the school's former gynecologist George Tyndall. It's costing millions of dollars in court settlements and a loss in trust.

"That's now primarily in the hands of the lawyers, but we need to be receptive to anyone that reaches out to us, be providing care, help them get to the right place that they need," said Folt.

And the school is also dealing with the admissions scandal. A long-term athletics department employee, a coach and three former staff members were allegedly involved in the scheme.

"I'm telling them about the admission issue is that it really affected none of the students that come in through the normal admissions process, so that's 66,000 applications that are being processed in a really amazing way," said Folt.

But despite the clouds of scandal it was sunny on campus as the formal inauguration took place in Alumni Memorial Park.