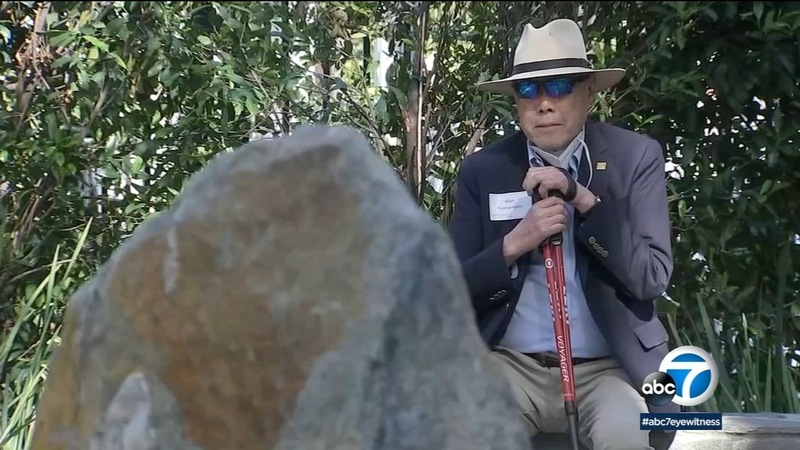 Eighty years ago, Japanese American students at USC were forced out of school, and into internment camps when the United States entered the Second World War. Today, a rock garden is being dedicated to those students.

The architect says from the front, the rock formation represents the turmoil of that that time, and from the back, its smoothness is like the calm waters of a flowing river.

Joanne Kumamoto and her sister Corrine Oishi are Jiro Oishi's daughters. He was a student at USC when he and his family were taken to an internment camp in Arizona.

Jiro Oishi, like many Nisei, were not allowed to continue their education at USC after the war.

"Now that they're willing to acknowledge it, and speak to that, to me makes a big difference," Kumamoto said. "I think it brings a change to the university, and so that's why I think it's very appropriate."

The first visitors didn't say much. They found a quite spot to reflect. And that's what the garden is designed to do. Jiro Oishi's children say their dad would have enjoyed this tranquil place on campus.

Ten years ago, USC brought back some of the surviving Nisei students and awarded them their degrees, whose education was disrupted during the war. Jiro Oishi's daughters say this garden helps the University, city and country move forward from a dark chapter in our history.

Corrine Oishi was philosophical about what the garden stands for.

"Life is ahead. And you just let the things go around you and just move forward," she said.

The direction of the garden, the flow of the rocks is significant because it faces the alumni building. The significance there, looking toward the future and hoping not to repeat the past.