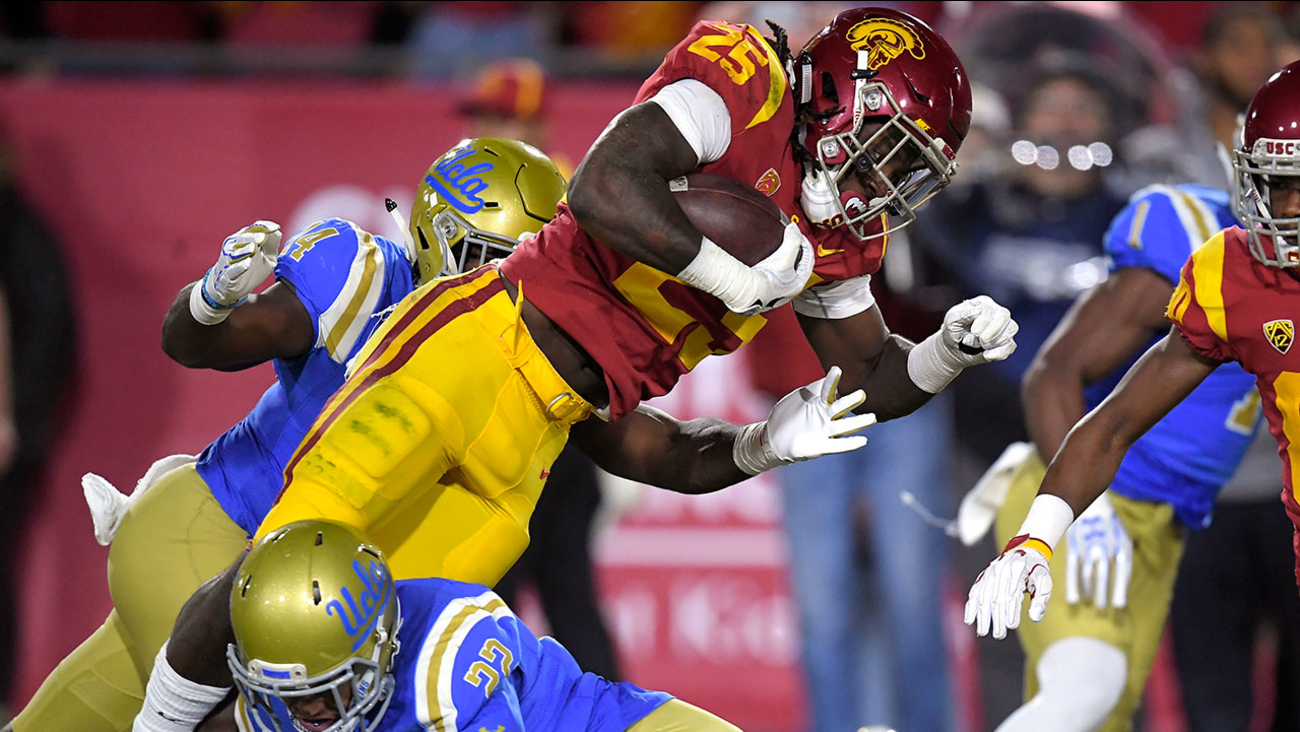 LOS ANGELES -- Sam Darnold passed for 264 yards and a touchdown and rushed for another score, and No. 12 Southern California persevered for its fourth consecutive victory over crosstown rival UCLA, 28-23 on Saturday night.

Ronald Jones II rushed for 111 yards and two touchdowns, and Michael Pittman Jr. returned a punt 72 yards for a touchdown on a spectacular trick play in the first quarter of the regular-season finale for the Pac-12 South champion Trojans (10-2, 8-1).

Josh Rosen passed for 421 yards and hit Jordan Lasley for three touchdowns in the first - and probably only - collegiate meeting between Los Angeles' star quarterbacks.

USC recovered an onside kick and ran out the clock with gutsy carries by Jones, setting off a celebration on the Coliseum field. USC retained the Victory Bell in the final home game for the Trojans' seniors - and possibly for their NFL-caliber underclassmen including Darnold and Jones.

Even after wrapping up a spot in the conference title game with a win at Colorado last week, USC finished strong in the crosstown showdown with its 16th consecutive victory at the Coliseum, including every game with Clay Helton as its head coach and Darnold as the starting quarterback.

Darnold and Rosen left their high schools on opposite sides of the LA area three seasons ago, but hadn't yet played against each other due to Darnold's redshirt year in 2015 and Rosen's shoulder injury in 2016. With dozens of NFL scouts and executives in the Coliseum, Darnold and Rosen both looked sharp - but Darnold's receivers and running game came up bigger.

While both passers showed off their NFL-coveted skills on a cool night at the Coliseum, Darnold's offense came up with just enough big plays to keep the Bruins out of reach.

Although the Bruins never led, UCLA put on a strong performance in its rivalry game after an up-and-down season under coach Jim Mora, who won his first three editions of this matchup before losing the past three.

Less than six minutes in, the Trojans pulled off a remarkable special-teams trick for their first touchdown. When UCLA's Stefan Flintoft angled a long punt toward the USC sideline, the Trojans ran back toward the center of the field to block for Ajene Harris, who pretended to catch an invisible ball while Pittman scampered down the far sideline, eluded a tackle and scored.

UCLA answered smartly with an 80-yard touchdown drive including a 41-yard catch and an 11-yard TD grab by Lasley, but Jones' 2-yard TD run moments later put the Trojans back on top.

After both teams committed turnovers deep in their opponents' territory during 29 scoreless minutes, Darnold finally finished a drive late in the third with a 2-yard keeper. Rosen responded immediately with a 79-yard drive capped by another TD pass to Lasley.