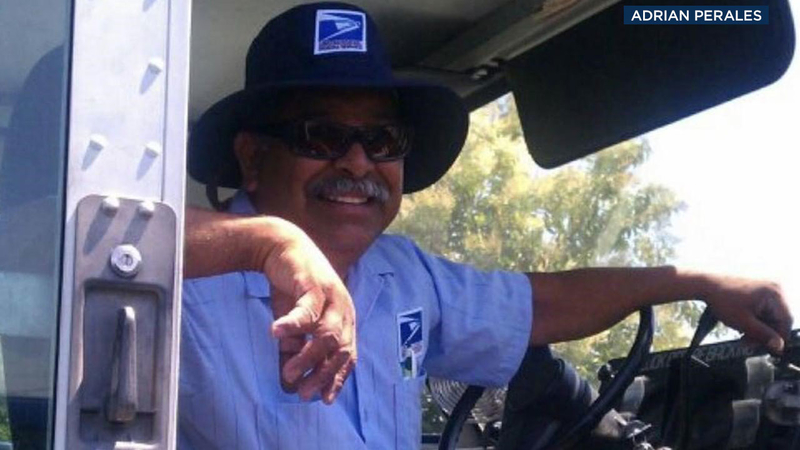 COMMERCE, Calif. (KABC) -- A postal worker and father of five was killed Monday after a vehicle crashed into his USPS truck in Commerce.

Authorities said the crash happened just after 10 a.m. at the intersection of Eastern Avenue and Atlantic Boulevard. When firefighters arrived, they found two vehicles had crashed into a nearby building.

The family of the postal worker identified him as Joel Perales, who they said had worked for the service for 30 years.

Two other people suffered minor injuries, and the driver of the white sedan was being investigated for a possible DUI. Authorities later told family members that he passed a sobriety test, but they were also drawing his blood to see if he had anything in his system.

Perales' family said it was his day off and he took an extra shift to have extra money for the holidays and to get more gifts for his grandchildren.

"Of all days, not thinking that this is going to happen, he goes to work. While delivering packages, a car ends up crashing into his truck and he's in the back and the unfortunate happens - he passes away," nephew Adrian Perales said.

The force of the crash left the car that struck Perales ended up wedged underneath his truck. It also pushed the USPS truck against a nearby big rig.

"It's going to be a hard loss, especially at this time, the holidays and Christmastime. But I just wish that it wouldn't happen to anyone else," Adrian Perales said. "He touched many, many lives."

One witness said the driver appeared to be speeding and starting losing control right before the crash.

The family said Perales is survived by his wife Virginia, children - Herman, Benjamin, Angelica, Joey and Timothy, grandchildren and "countless brothers and sisters."

Family members said Perales was also a pastor at Templo de Alabanza in La Mirada and die-hard Dodger fan. His nephew said family members would all often go to games.

A GoFundMe page has been started to help the Perales family with memorial services.