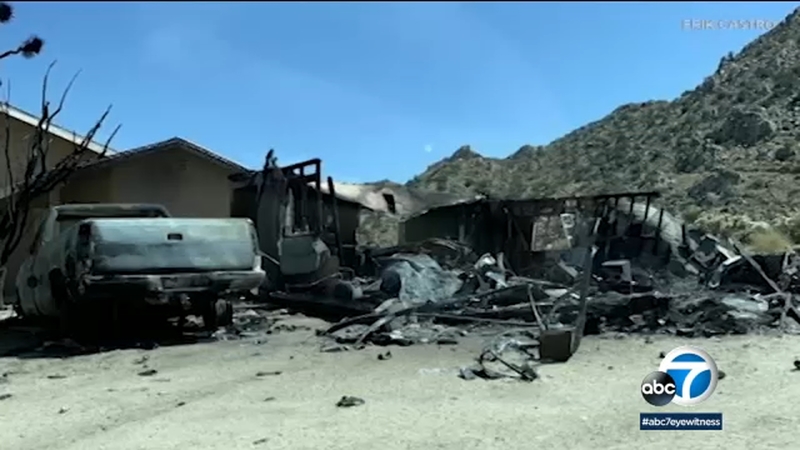 JOSHUA TREE, Calif. (KABC) -- A weekend getaway stay at a Joshua Tree Airbnb for Erik Castro and his friends Saturday turned into a nightmare.

"We wanted to just hang out at a nice Airbnb and relax and go swimming...and have a fun weekend," Castro said.

In August, a friend booked a one-night stay to celebrate a birthday at 'Divinity Rising.' The picturesque home touted views of the desert landscape and a large indoor pool among its amenities.

"When we were first pulling up, we could only see the top half of the house and it looked really cool," Castro said.

As their entourage got closer they realized something was horribly wrong.

"We saw the front of the house and it was completely destroyed. The doors were kicked in, the windows were smashed, and half the building was burnt down along with cars and trash in the front," Castro said.

Castro said they went back to town where he contacted 911. "The dispatcher looked it up to see if there had been a report. She found that there was a fire but told me nothing further," he said.

A quick online search of the address turned up information about a house fire on Aug. 29.

We "found several articles relating to a honey oil explosion and that's how we found out the whole history about the Airbnb host getting arrested," Castro said .

He says they called Airbnb for help but got the runaround. After two hours on the phone with a company representative they were able to book another nearby rental property.

The group had to pay an additional $400 on top of what they had already paid, Castro said.

"We regret that our initial handling of this incident did not meet the high standards we set for ourselves, and apologize for this unfortunate experience. We've completely refunded Ms. Spencer's trip and provided an additional booking coupon, and we thank her for being a valued member of the Airbnb community."

A friend of the property owner released an additional statement, but asked to remain anonymous. "I had been going to this cabin for three years and Patrick, the owner, was the nicest and kindest person every time we stayed...there was never any indication of this type of activity. He had many great reviews on Airbnb. I am in total disbelief about the circumstances and know he would have most definitely given the refund if he was capable of doing so."

Castro said despite everything they were able to celebrate his friend's birthday. He also confirmed that Airbnb reached out to his friend and that she received a full refund.
Report a correction or typo
Related topics:
joshua treesan bernardino countyairbnbvacationrental propertydisaster
Copyright © 2021 KABC-TV. All Rights Reserved.
More Videos
From CNN Newsource affiliates
TOP STORIES