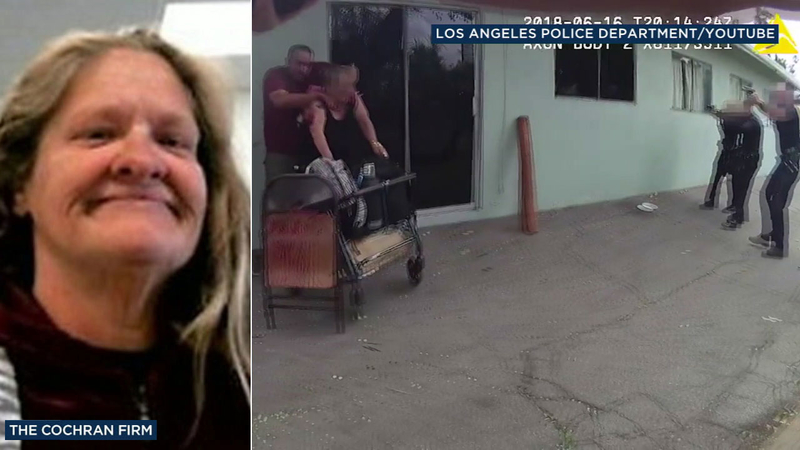 VAN NUYS, LOS ANGELES (KABC) -- An attorney for the victim of the family of a woman who was shot and killed by Los Angeles police officers during a hostage situation in Van Nuys said police failed in de-escalating the situation and criticized the tactical protocols taken by the involved officers.

Attorney of The Cochran Law Firm Brian Dunn said the death of the victim, 49-year-old Elizabeth Tollison, was preventable.

"You have three officers firing, and we have accounted for 18 total rounds and during the sequence of firing the suspect is in very close proximity to my client's mother," Dunn said. "It is illogical and inconceivable for an officer on the scene to not realize she will almost certainly be shot if 18 rounds are fired."

Dunn said police officers should have better assessed the situation with the suspect Guillermo Perez, who was seen in the video released by LAPD to be holding a knife to Tollison's throat.

Dunn suggested Perez was mentally unstable and that officers should have recognized that when confronting him, criticizing how police officer kept yelling during the encounter.

"It should have been obvious, based on the manner he was acting, that something wasn't right with him," Dunn said.

He also accused LAPD of wrongfully framing the situation as the officers trying to save Tollison's life.

The comments were made at a press conference to discuss the filing of claims for wrongful death, assault and battery, and negligence against the City of L.A. and its police department on behalf of the family of Tollison.

During the press conference, one of Tollison's children, Jesse Pelaez, also criticized LAPD's handling to the hostage situation.

"The police had no regard for my mother's life and shot her down," Pelaez said. "The situation could have been handled in so many different ways, but it looks like they chose to make it the worst case scenario just so they could kill the suspect."

A lawsuit was announced by the family of a woman who was shot and killed by LAPD officers during a hostage situation in Van Nuys.

The incident occurred on June 16, when officers with LAPD's Van Nuys Division received a radio call about a man who had stabbed his ex-girlfriend with a knife, LAPD Chief Michel Moore said during a press conference Tuesday.

Responding officers confronted Guillermo Perez outside of a church on Tyrone Avenue. Perez was holding a metal folding chair and a large knife. Officers told him to drop the knife, but he ignored their commands. That's when police fired bean bag rounds at Perez, Moore said.

Officers fired 18 rounds, and Perez was shot and killed. Tollison, the innocent bystander, was struck twice by police gunfire, and she later died at a hospital, according to Moore.

"While Ms. Tollison was being held by Mr. Perez, the three LAPD officers negligently assessed the circumstances presented to them, and negligently discharged their department-issued firearms at Mr. Perez and Ms. Tollison," the Cochran Firm stated in a press release.

Moore said an investigation will look into whether proper procedures were followed.

Perez had a very violent past. He was released from prison and also convicted of robbery. He was a documented gang member who was arrested for assault with a deadly weapon and domestic violence.