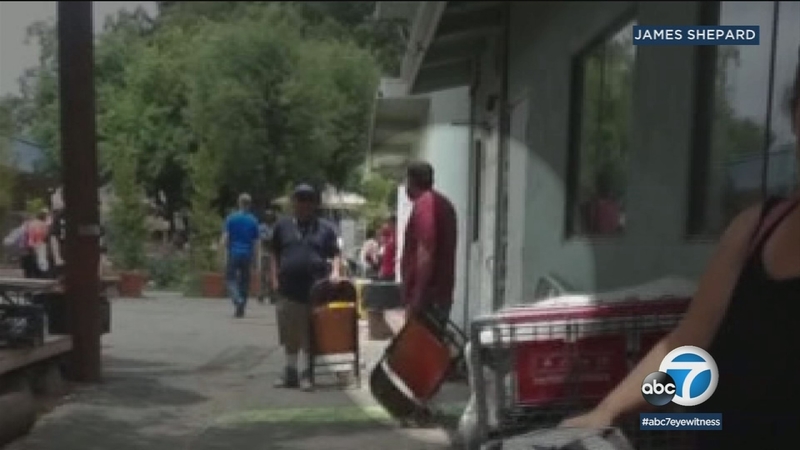 VAN NUYS, LOS ANGELES (KABC) -- An officer-involved shooting left a knife-wielding suspect dead after he stabbed two women at a Van Nuys church where people gathered for a meal on Saturday, police said.

Shortly after 1 p.m., Los Angeles Fire Department firefighters responded to reports of a stabbing at the church in the 6400 block of Tyrone Avenue, where they found the 30-year-old suspect armed with a sharp object that he had already used to injure a female victim, fire officials said.

When Los Angeles Police Department officers arrived, the suspect grabbed a second female victim and held the sharp object to her neck, according to a witness.

Officers opened fire, striking the suspect and victim. The suspect was pronounced dead at a local hospital, police said. The woman was listed in critical condition.

"The officers thought that he was going to kill her, so they took immediate action. An officer-involved shooting occurred. Both the victim and suspect were struck by gunfire from our officers," said Cmdr. Alan Hamilton of the LAPD.

The two female stabbing victims were also transported to a hospital. One of them women was in critical condition and the other suffered non-life-threatening injuries.

Minutes before police were on scene, video showed the suspect had a chair in one hand and a long knife in the other.

Shepard said before they opened fire, police tried to de-escalate the situation and used a bean bag gun. When the suspect still refused to drop the knife and took hold of the woman, the officer-involved shooting occurred.

In Shepard's opinion, police had to use deadly force. He said the suspect was not supposed to be on the church property and had assaulted one of the women in the past.

"This guy was going to cut anybody that came near him, anybody," Shepard added. "He probably would have killed them."