Vanessa Bryant posts photo of Kobe's, Gianna's jerseys: 'There is no #24 without #2' 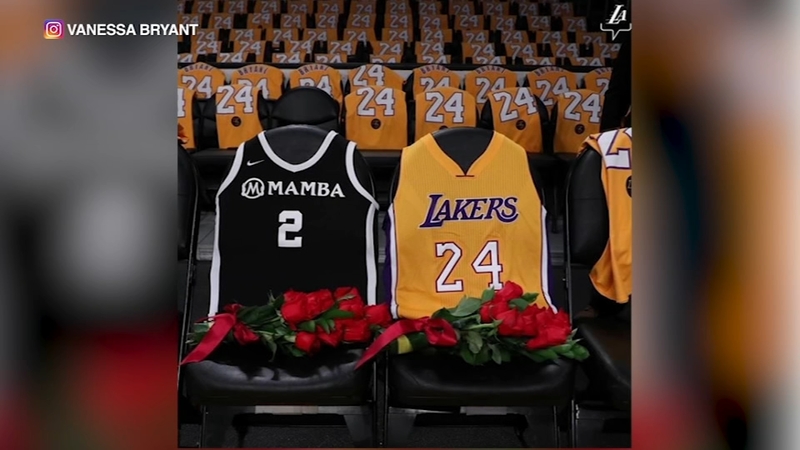 LOS ANGELES -- "There is no #24 without #2," Vanessa Bryant captioned an Instagram post showing the jerseys of her late husband Kobe and daughter Gianna draped over the seats where the two last sat at the Staples Center.

Before their home game against the Portland Trailblazers, the Lakers hosted a 25-minute heartfelt tribute to Kobe and daughter Gigi, who died when their helicopter crashed in Southern California, killing all nine people on board.

The celebration began with emotional videos, followed by performances from R&B artists Usher and Boyz II Men along with cellist Ben Hong. Fellow basketball legend LeBron James addressed the crowd, scrapping a prepared speech and going "straight from the heart."

Vanessa Bryant's latest post also included several hashtags; among them, "#GirlDaddy" in reference to the now-viral SportsCenter interview where Kobe calls himself a "girl dad."

"I asked if he wanted more children, and he said that his wife Vanessa really wanted to try again for a boy, but we were sort of jokingly concerned that it would be another girl, and I was like, 'Four girls, are you joking? What would you think? How would you feel?' And without hesitation, he said, 'I would have five more girls if I could. I am a girl dad.,'" she said.

The mother of Kobe Bryant's four daughters spoke out publically for the first time since the tragedy on Wednesday, thanking millions for "support and love during this horrific time."

In an Instagram post, she published a photo of her and Kobe and their four daughters and wrote, in part:

"There aren't enough words to describe our pain right now. I take comfort in knowing that Kobe and Gigi both knew that they were so deeply loved. We were so incredibly blessed to have them in our lives."