"I love you forever, baby."
KABC 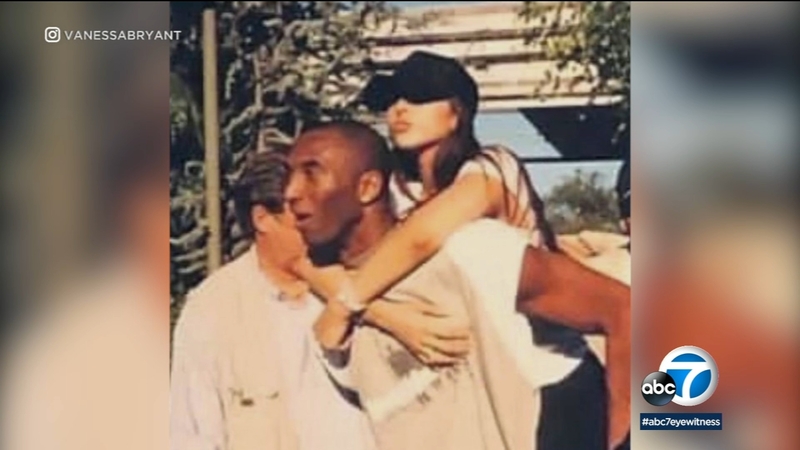 LOS ANGELES (KABC) -- Vanessa Bryant remembered her late husband, and basketball legend, Kobe Bryant on Monday with a touching social media post on what would have been the couple's 21st wedding anniversary.

The 39-year-old widow shared an old photo on her Instagram page of her and Kobe with her arms around him from behind.

She captioned the photo: "I love you forever, baby. Happy Anniversary @kobebryant #21," plus two heart emojis.

Bryant received a lot of heart emojis in comments to the post, including from friends Kerry Washington and Khloé Kardashian.

Kobe, his 13-year-old daughter, Gianna Bryant, and seven others, were killed when a helicopter they were in crashed on the hillside in Calabasas during a foggy day on Jan. 26, 2020.

The group was headed toward Thousands Oaks for a youth basketball game when their helicopter crashed.

In February, Bryant received the "Be Your Own Champion Award" at an event in Beverly Hills for her leadership through the Mamba & Mambacita Sports Foundation. She vowed to keep the legacy of Kobe and daughter Gianna alive.

"It was important to Kobe, exemplified by Gigi and something that Natalia, Bianka, Capri and I will always fight for," said Bryant.

The organization was founded to create a positive impact for underserved child athletes, in honor of her late husband and daughter.

Bryant also reached a new deal with Nike in March to create apparel honoring the legacy of Kobe and Gianna, with proceeds going toward the Mamba & Mambacita Sports Foundation.