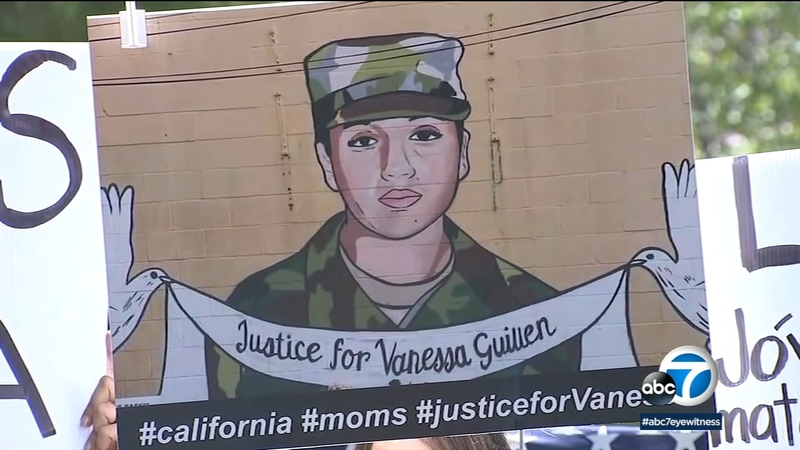 SAN FERNANDO, LOS ANGELES (KABC) -- For many in the Latino community, the story of Fort Hood soldier Vanessa Guillen, who disappeared in April and is believed to have been murdered, feels personal.

Her disappearance has garnered national attention, including in Southern California. A group of Latina moms on Friday gathered in San Fernando to demand justice for Guillen.

The Texas soldier's family believes she was murdered on the military base.They have maintained that a fellow solider identified as the main suspect in her disappearance had sexually harassed her and that she was afraid to report it.

"The fact is Vanessa Guillen could be any one of us, any one of our Latinas and women serving in the military, completely unacceptable that it occurred," said League of United Latin American Citizens (LULAC) CEO, Sindy M. Benavides.

LULAC, the oldest Latino civil rights organization in the nation, is asking women not to enlist in the Army.

The group is making the call after the presumed death of Vanessa Guillen, claiming the Army isn't doing enough to protect Latinas who are enlisted.

"Right now the military can't 100% guarantee that our soldiers will be safe on U.S. soil and their own military bases. And so we're asking all of our Latina mothers all mothers who fear for their daughter's life, to take a second look at potential careers," said Benavides.

The group of mothers who gathered in San Fernando spoke out in solidarity with the Guillen family.

"My son is currently in the Army serving. He is appalled at what is happening," said one woman. "We will no longer be silent to the injustice that is happening to the Latino community. If this had been a blue-eyed, blond-haired young woman, this would have been figured out two weeks ago," she added.

Army officials said they are committed to finding out how this happened, while Guillen's family has maintained that Fort Hood officials have lied and not been transparent since the 20-year-old went missing on April 22. The family is seeking a congressional investigation.

"This family is in so much pain. They they just wanted their daughter back home, and this is just an injustice," said Guillen family attorney Natalie Khawam.

Human remains were found Tuesday in Texas but have not been officially identified.

The U.S. Department of Justice charged a female civilian in connection with the disappearance, suspected of having helped dispose of Guillen's body. Some members of Congress are asking for a thorough investigation by the Department of Defense Inspector General, including Congressman Tony Cárdenas, who represents the district where Friday's protest was held.

"It has been more than two months since Vanessa Guillen went missing and we still don't have all the information. I am joining my congressional colleagues in calling for a full and independent investigation by the Department of Defense (DoD) Inspector General's Office into SPC Guillen's disappearance. The U.S. military has a responsibility to ensure the safety and well-being of the young women and men that take an oath to defend our country. The Guillen family deserve answers and justice," Cárdenas told Eyewitness News in a statement.
Report a correction or typo
Related topics:
societysan fernandolos angelessearchvanessa guillensoldierstexasfort hoodmissing woman
Copyright © 2021 KABC-TV. All Rights Reserved.
TOP STORIES
LA to consider requiring vaccination to enter public indoor spaces
Driver kills 91-year-old woman in South LA, flees scene
Teen living on streets found in Lancaster; search for family
Woman sues LA after hit by car on street where tents block sidewalk
3 killed, 2 hospitalized in Burbank street-racing crash
OC School Board to sue Newsom over student mask mandate
'Ample chance' of new COVID variant worse than delta, Fauci warns
Show More
Spirit Airlines' cancellation of hundreds of flights enters 4th day
Mega Millions ticket worth nearly $1.1M sold in Pacoima
Offspring drummer dropped from tour for not getting vaccinated
Jennifer Aniston says she cut ties with people over vaccines
Bear cub rescued from Sierra wildfire escapes Tahoe center
More TOP STORIES News