Massive Encino mural stuck in limbo over threat of lawsuit 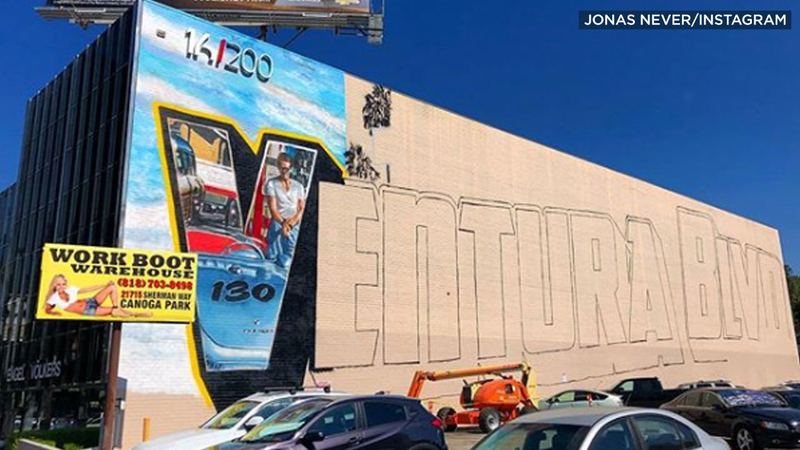 Encino mural stuck in limbo over threat of lawsuit

ENCINO, LOS ANGELES (KABC) -- Everyone loves postcards - but one the size of an Encino office building is spurring the threat of a lawsuit.

It's a huge mural that was supposed to adorn a building at 16200 Ventura Blvd. in Encino, but instead it's now stuck unfinished.

It's the work of Jonas Never, the artist who painted a mural of LeBron James in Venice that has since been vandalized and covered over.

The Encino mural is meant as an homage to Ventura Boulevard and was commissioned by the building's owner. But Never said the owner of a neighboring parking lot has forced him to halt painting the mural, one week into a six-week project.

"When he drove by one day and saw the mural he flipped out," Never said. "I was actually up on the lift, 40 feet in the air and I could hear him yelling through the guy's phone...and they're like 'We're going to call the cops! Cease and desist!'"

Never said the building owners already received a permit from the city of Los Angeles to go paint the mural, but have hit the brakes because of the threat of a lawsuit.