KABC
By Leanne Suter
RESEDA, Calif. (KABC) -- Authorities released surveillance video of a 33-year-old man suspected of being a sexual predator who led them on a chase Wednesday that ended with him taking a deadly drink.

Jonathan Hanks, 33, was suspected of being a sexual predator on Snapchat. He was caught on surveillance video and authorities released the images because they fear he may have targeted numerous young girls.

"We have real concrete reasons to believe that this was not his first time doing something like that. Because of that, we believe that there are other victims," LAPD Detective Ninette Toosbuy said.

The bizarre and deadly drama unfolded on the 101 Freeway in Ventura, when Hanks fled from police who had been doing surveillance on a suspected rapist.

The 33-year-old suddenly crashed into a freeway median after taking his own life with a lethal liquid.

"Our primary pursuit officer saw indications of that by the gentleman drinking something and then flopping over to the right side of his car," CHP Officer Christopher Terry said.

Hanks was pronounced dead at the scene. He was wanted on suspicion of violently raping a teen girl police said he met on Snapchat.

"He lured and convinced this 14-year-old girl to sneak out of her house when her parents were not aware of her doing so so that they could meet up," Toosbuy said.

Authorities said the attack happened earlier this month at a Reseda motel.

On Thursday, a vehicle check in Oxnard came back with information saying the car belonged to a rape suspect, believed to be a 35-year-old Camarillo man, according to the California Highway Patrol.

When officers tried to pull over the man, he started a chase that eventually ended when he crashed near Seaward Avenue in Venutra. That man was later determined to be Hanks. 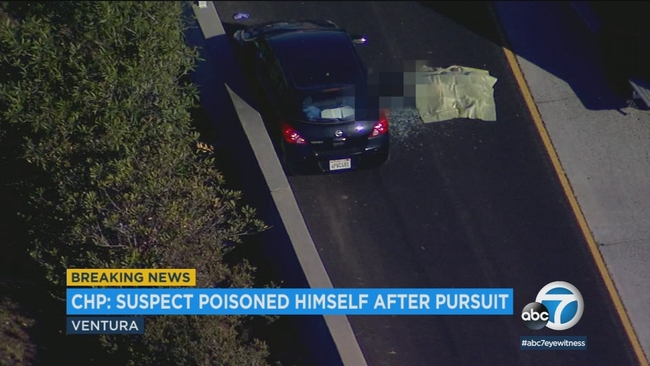