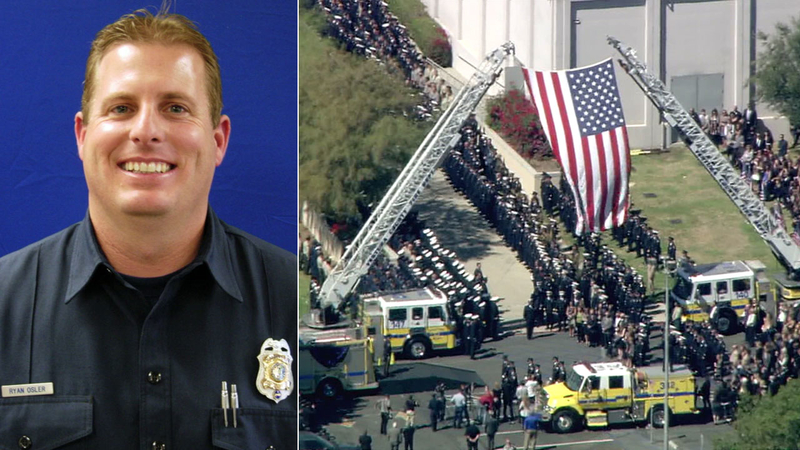 WESTLAKE VILLAGE, Calif. (KABC) -- Loved ones bid an emotional farewell to a Ventura County firefighter who died last month on his way to battle a wildfire at Vandenberg Air Force Base.

Osler was a passenger in a water tender truck that hit a curb and rolled over at a roundabout on Purisima Road in Lompoc on Sept. 21.

The driver of the truck suffered minor injuries, but Osler died in the crash.

Osler was an 18-year veteran of the Ventura County Fire Department. His father served 22 years in the same department.

More than 1,000 firefighters attended the service, along with many family and friends. In addition, 150 fire engines lined up outside the church, and crews from far and wide came to show their support.

Memorial service underway for our fallen brother Engineer Ryan Osler @calvarywestlake #VCFD. Thankful to all who are here with us today pic.twitter.com/TjoVwH12Ra

"I appreciate all the support we've had from fire and law enforcement from across the state. Right now, all 32 of our fire stations are covered by other county and city engines so that all 32 of our stations can be here to honor Ryan's memory today," said VCFD Chief Mark Lorenzen.